Game of Thrones Recap: The Mountain and the Viper | The Mary Sue

Game of Thrones Recap: “The Mountain and the Viper” 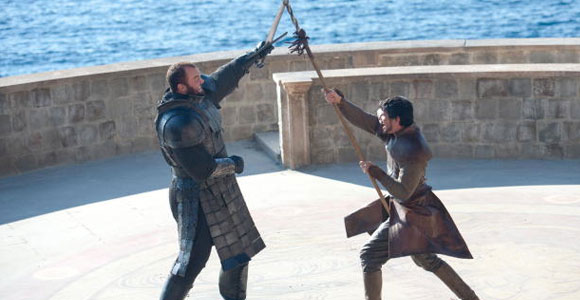 The last episode of Game of Thrones prepped us for a couple of major confrontations. Last night gave us the first of these, along with all new reasons to scream at our televisions. Dive in and sound off in comments!

Years of watching television and movies and reading books has given all of us a certain expectation of how stories are meant to work. After nearly four seasons of Game of Thrones I should know that George R.R. Martin wrote his stories with a dedicated eye to subverting typical narratives and rebelling against our expectations of heroes winning the day, villains losing, and good generally conquering evil no matter how preposterous the odds. Which is to say I should know better.

This season, Game of Thrones set us up once more, making us fall for a fascinating and sexy new hero, Oberyn Martell, The Red Viper of Dorne, Devoted Brother, and Avenger of His Raped and Murdered Sister Elia. The show’s writers gave him biting dialogue. Actor Pedro Pascal gave him swagger and sex appeal. And we fell hard, didn’t we? Yet the gods (and by this I mean Martin and show creators David Benioff and D.B. Weiss) are cruel. But let’s not get ahead of ourselves. Though named for its final and gruesome showdown, there was a lot more to “The Mountain and the Viper.”

As the Wildlings continue their rampage of the North it becomes more and more impossible to imagine Jon Snow and Ygritte will ever get back together. His betrayal aside, we’re seeing just how different they are, as she cuts down unarmed women and men without batting an eye. She’s seems a ruthless warrior – but not completely without mercy, urging Gilly and little Sam to keep quiet to stay alive. Still, Jon wouldn’t approve. And did you catch the blood dripping through the floorboards above Ygritte? The North thought they had problems with the Greyjoys attacking.

Speaking of the Greyjoys, Ramsay Snow has made a perfect puppet out of Theon/Reek, sending him to the Greyjoy-seized Moat Cailin to deliver his terms. Alfie Allen is delivering a stunning performance this season, and I am with those of you who are demanding he get some Emmy attention. As Reek, he is believably broken, with frightened eyes and a cowering posture. Decked out in his old finery and given permission to play at being Theon again, he stands tall, projecting the arrogance and pride he once slathered himself in. But there’s still a shakiness to his eyes, and when he’s compared to a coward—or more specifically “a whipped dog” or “woman”–you see all this crack away as his fears and trauma overtake him.

Effectively, Theon is a Trojan Horse in this episode, leading his own countrymen to be flayed and slaughtered under the promise of a peaceful surrender. But here’s my question to all of you: Did Theon/Reek suspect what would really become of those men? After all the torment and torture he’s suffered at the hands of Ramsay, he must have, right? But on the other hand, Reek has come to believe Ramsay is kind in that warped Stockholm Syndrome way. What’s most remarkable is that Allen leaves us with an inscrutable expression that could play either way! 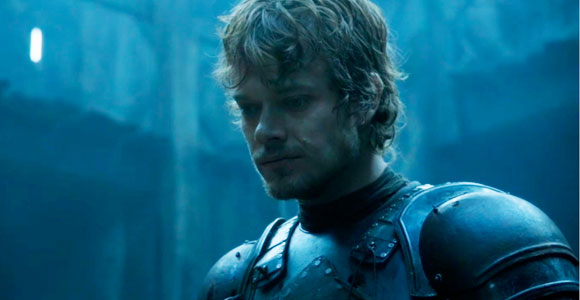 As for Ramsay, his barbarian behavior not only clears out Moat Cailin of its Iron-born invaders but also wins him the approval he’s so long craved from his father, Roose Bolton. And so this Warden of the North, who won his title through treachery and murder, passes on his name to a psychotic sadist with major Daddy Issues. Reminding us what a massive hold the Boltons now have on Westeros, Roose outlines that theirs is the biggest territory, more sizeable than all the others combined. War has just ended, but are we brewing for another battle? The Boltons versus the Lannisters versus the Targaryens (if Dany can get her army in gear) versus… Littlefinger?

The Vale is running their own version of Law & Order with a panel of three elders inquiring about what happened to Lysa Arryn. Littlefinger says suicide, a story that is completely preposterous to them. (Points to the clever lady who called Lysa of House Tully an “odd fish.”) Enter Sansa, called in to testify as Baelish’s niece Alayne. For seasons Sansa has been dogged for her inability to lie, but she’s gotten quite crafty, developing her own brand of dishonesty. It’s a very special recipe, dealing in a generous spoonful of truths (I am Sansa Stark! Lord Baelish did crazy things to protect me! He kissed me! Aunt Lysa was furious with jealousy!) and just a dash of lies (Kiss on the cheek! Lysa leapt!) And it works. 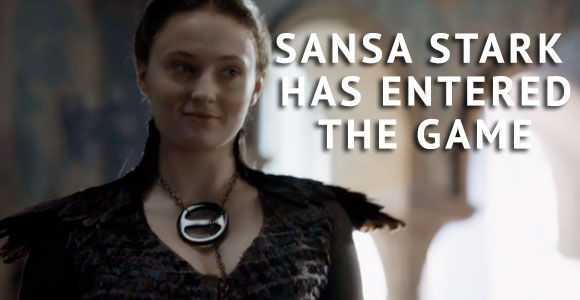 She’s not so much a team player as a young woman who has learned that Baelish, a master manipulator, can be manipulated by no one so well as her. He is the instrument to keeping her alive and safe, and she knows just how to play him. Sansa has grown up fast in the Vale of Arynn. But as Littlefinger stirs up the Vale for a fight with the Lannisters, little Robin is being prepped to leave the nest. And I bet he’ll fly just about as well as his mother did.

Speaking of betrayals, the emerging dynasty of Daenerys Targaryen has suffered a serious setback with the banishment of Jorah Mormont. I really didn’t see this coming, but I completely should have. After all, secrets in this world are made to resurface at inconvenient times. I respect Ser Barristan for how he handled this, though. He went straight to Jorah instead of blindsiding him, and he told him in no uncertain terms Jorah would never be trusted alone with the Khaleesi again. It was an exceedingly honorable way to treat a man he believes to be dishonorable.

My heart broke for Jorah as he tried, lip trembling, to explain himself to Dany, being so desperate not to lose her. Watching him ride away from Meereen feels wrong, and I genuinely have no idea where he’ll surface next. Perhaps in one of Dany’s other conquered cities to try to do right by her? Or will he dare go back to King’s Landing? Where can a man whose twice shamed himself go? This can’t be the end of his relationship with Dany. Not really. Right?

Speaking of, King’s Landing is the last place this episode touched down. The show’s runners set us up two weeks ago for an epic showdown between the malicious, merciless Mountain and the dashing and vengeance-fueled Viper. Then they made us wade through a snarl of other plot lines before we got to Tyrion Lannister’s trial by combat! After a scene where Tyrion tries to grapple with the innate cruelty and bloodlust of men, we see Oberyn making out with his paramour, swigging wine and refusing to wear armor even though he is about to fight one of the show’s most feared–if not the most feared–figures. All red flags.

Every other fantasy story I’d ever been told promised me that this handsome and noble avenger would win the day, though he might get roughed up in the process. But I’ve been watching Game of Thrones too long to trust in convention. The battle begins and I have gone from lounging on my couch to being curled up into a knot, rigid with anxiety. Oberyn spins, his gorgeous gold silks twirling around him as the audience of King’s Landing cheers as if this is a great show and not a life and death battle! They are our stand-ins, delighted in his confidence and showmanship. But as he twirls and leaps I remember The Hound’s warning to Arya, and I keep my eyes on The Mountain’s insanely massive sword.

Oberyn is undoubtedly a hero as he demands justice for his sister, looping around The Mountain, striking The Mountain with painful blows again and again. He knocks The Mountain to the ground and demands this monster of a man confess to what he did. (SAY HER NAME!) In this moment, Oberyn is in all his Inigo Montoya glory. And though it seems the battle’s over, I can’t uncurl from my knot. Then it happens. The Mountain’s giant hand swats Oberyn off his feet. The Mountain Who Rides rises over him, and promptly smashes Oberyn’s face with a blow that shatters his beguiling smile and sends his teeth rattling across the stones. My heart sank. My throat went dry. Then The Mountain confesses–no, not confesses. He brags. He brags that he did rape and murder Elia. And then he shows Oberyn how, crushing his skull with his bare hands, turning his face into a blur of blood and brain matter.

We’ve seen so much death and such breathtaking brutality on this show, I had actually thought I couldn’t be shocked anymore. Surprised, sure. Not shocked. Well, fine. I was wrong. Game of Thrones set us up to adore Oberyn. We did. And then we saw him be literally crushed before our eyes. I stared at his gorgeous silks giving way to a dark pool of blood and pulp that moments ago was once Oberyn’s face. With Ellaria Sand who cried out in horror, I screamed… and then felt numb.Cersei gives a smug smile. Jaime drops his head. Tyrion looks at this grim scene with shock. And I realize: We’re poised to lose Tyrion too.

Next week episode is called “The Watchers on The Wall,” so we know we’ll hear more about Castle Black, which so far this season has been good for little more than snarking at Jon Snow. (Thankfully he managed to trek out to Craster’s Keep and give us some action and retribution!) Here’s hoping that ep will give us something to root for, or at the very least some more Brienne & Pod.