Game of Thrones Recap: The Children

Night has fallen, and now our hiatus begins. 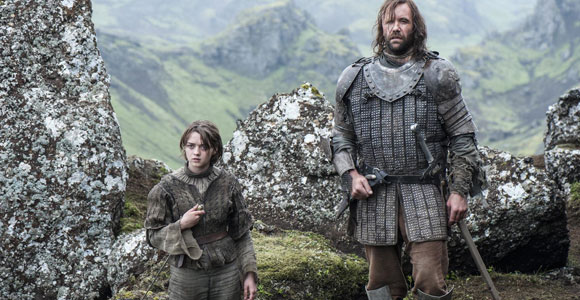 Last week’s penultimate episode of Game of Thrones was a little underwhelming, as the battle for Castle Black is no Battle of Blackwater. But the writers made up for it this week with a finale episode that had us freaking out on Father’s Day.

A couple of weeks ago, we were cursing the gods over Game of Thrones’ unexplained hiatus on Memorial Day weekend. But could it be HBO has a twisted sense of humor, scheduling “The Children” for Father’s Day? I’d certainly like to think so. No matter what scuffles or arguments may have broken out over the course of your Father’s Day weekend, none could possibly compare to the catastrophic day Tywin Lannister had. And let’s face it, this bad dad had it coming. But before we jump ahead to all things Lannister, let’s pick up where “The Children” did—with Jon Snow.

At the end of “The Watchers On The Wall” Jon Snow was setting out on a fool’s mission to assassinate Mance Rayder if he could not urge him to peace. Despite being the leader of the Wildlings, Mance is a surprisingly civilized man and treated Jon like a guest. But before they could broker for an arrangement (which let’s get real, would never have worked) in swooped Stannis and a massive army, primed to slaughter the Wildling force!

Instead of fighting with the Lannisters at King’s Landing, this self-proclaimed king decided to defend the realm with loads and loads of soldiers. But as the bodies of the Night’s Watch burned, we spot some of Stannis’ menagerie through the smoke and are reminded that the Wildlings battle is not the end of blood and carnage this “king” will bring. Spotting little princess Shireen next to her icy mother reminded me of Melisandre’s ominous words about the girl’s purpose. I have no idea what she has planned for her–I mean, aside from nothing good. The red priestess also exchanges a glance with Jon Snow, an ominous sign if ever there was one.

I’ll admit, I’ve long been bored by Jon’s storyline. While everyone else got their hands dirty, Jon and his honor seemed above it all, North of The Wall. Even when he killed a peer, it was essentially a sanctioned killing for strategic reasons. Sure, his romance with Ygritte was steamy. But finally in his grief and regret Jon has become textured and intriguing to me. Cheers to Kit Harington who has finally managed to inject some pathos in his pretty boy’s hangdog expression. When he set up the special pyre for Ygritte, my heart ached for him. Then I giggled as he did the cliché walk away from fire, too cool and hero-like to dare look back. I laughed to myself thinking if only Game of Thrones had explosions, this cliché would be perfect. Then came explosions—but far north.

Bran, Hodor, Jojen, and Meera found the tree from the young Stark’s vision. And as the show has long telegraphed, Jojen sacrificed himself getting them there. But while I had suspected the poor kid would croak from becoming increasingly fragile, he was repeatedly stabbed to death by warrior skeletons. Because that’s a thing that happens now. As I was visiting my parents for Father’s Day, we watched this episode together. Neither my mom or dad had seen an episode of Game of Thrones before, and I tried to give them some general sense of what was happening so they could follow along. Then came this scene, where I was yelping and throwing my hands in front of my face as Meera swung into battle mode and Bran warged into Hodor. (While I’m still troubled by the ethics of Bran overtaking Hodor’s body, it did prove a lifesaver for both here.)

Words failed me as to how to explain all this, because the show had just cracked open a new brand of magic and monsters. And then came The Children with their bombs and force fields, plus a man embedded in roots who might be a god? He promises Bran he will fly, and we leave this Stark—surrounded by bones but closer than ever to his destiny—until season five.

Far away, Dany is struggling with politics and ethics as well, facing former slaves who are begging for the security of their bondage and confronting that her children have grown into beasts. The biggest of her dragons, Drogon, has moved on from sheep to children, and I can’t say I’m surprised. Still, that was one ghastly reveal, the little girl who was made a meal. So, though it hurts her—and makes her a hypocrite—Daenerys Targaryen, the Breaker of Chains, chains two of her dragons beneath the city of Meereen. But Drogon is missing, and clearly dangerous. Jorah warned her. But Jorah is gone.

In King’s Landing the Lannisters are another family in crisis. Joffrey’s dead. Framed for the boy king’s murder, Tyrion is set for execution. Tommen is to be king/the puppet of his grandfather Tywin and wannabe wife Margaery Tyrell. But when Tywin pushes Cersei to leave King’s Landing (and her son) to marry Margaery’s brother, she snaps. After being the dutiful daughter for decades, marrying as her father asked and putting the family first (well, except Tyrion, making her even more a Daddy’s Girl), she not only rejects Tywin’s command, she blows up his delusions. (Guess what dad, I’m banging Jaime!) If it weren’t for the rape scene earlier this season, this and the subsequent sex celebration with her brother/lover would seem almost victorious. But as much as the show’s makers might want us to forget that particular scene, I’m still scarred, even if Cersei has moved on. (Has she moved on though? Please discuss below.)

What will a King’s Landing look like with these siblings openly acknowledging their love and bastard children? Tywin doesn’t even have time to plan for that mayhem, thanks to his baby boy whom he has long wished dead. With Cersei ready to say “f*ck it all” Jaime joins in, teaming with Varys (who has been offscreen most of this season for no reason I can discern) to free Tyrion, no matter what hell that might bring. But with the path to salvation just ahead of him, Tyrion decides he has a score to settle and goes to find his father.

I suspected Tyrion might seek vengeance on his not-so-dear dad, but I was flabbergasted when he stumbled upon Shae—and in the bed they once shared, no less! And calling Tywin “her lion!” I genuinely cannot think of any other betrayals this gal could manage. I used to love Shae as a character, for her fearlessness and her mystery. But when he chokes her to death with a Lannister-given gold necklace, it seems poetic justice. But still, terrible and sad. Can there be no love in Westeros? Tyrion and Shae. Jon and Ygritte. Jaime and Cersei. Sansa and Joffrey. Even Ned and Catelyn were plagued with unenviable problems, long before all the Lannister business. 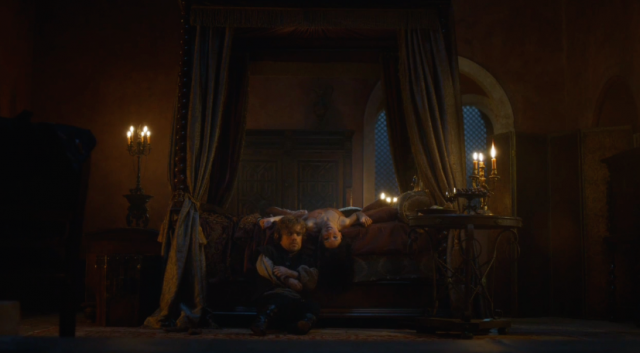 Still, the job’s not done. Taking Joffrey’s beloved crossbow, Tyrion murders his father. Of course it was after a rage-laced speech, and of course Tywin underestimated his son—in this case his son’s wrath—and sealed his death by twice calling Shae “whore.” Even the spider couldn’t have guessed that Tyrion would kill the Hand of the King. His look of shock when the bells sound throughout the Red Keep urged my dad to ask, “Is he going to leave too?” I began to correct him, “No way. Varys is too embedded and invested in the goings-on in King’s Landing. He’d never”—and then Varys got on the boat. My jaw dropped and no more words tumbled out. I was trying to explain this show that I’m obsessed with to newbies, and again and again this episode threw me curves I couldn’t explain. This finale was studded with world-changing revelations, and I’m still reeling.

Another sequence where I failed my parents in way of explanation: Arya meets Brienne. I curled up into a tense knot as Brienne spotted Arya on the top of the hill. After an initial yelp of excitement, my thoughts raced. If Arya is there, the Hound is not far. The Hound will fight Brienne. Someone will die, but who!? Probably not Arya. The Hound? Brienne? Podrick? I squealed and cursed as these towering not-really-knights pulled their swords and laid into each other relentlessly. My mom called out, “Who’s good and who’s bad? Who should I be rooting for?!” I managed only, “It’s complicated!”

I mean, Brienne is on a noble mission, though she is working for the Lannisters. The Hound is a murderer, thief, and generally brutal man… but he’s cared for Arya. And by fighting Brienne, he’s defending Arya. He has no hope of earning a ransom from her family now, and has given no sign that he’d sell her to her enemies. Then when a warrior whose carrying a Lannister blade shows up, he gives his life in trying to keep Arya from her.

As they fought, I was conflicted. We’d had this showdown suggested weeks ago, and as The Hound isn’t much for talking and Brienne isn’t much of a people person anyway, swords would cross. Ultimately, I rooted for Brienne. But after all we’ve been through, it pained me to see The Hound broken and useless at the bottom of that cliff. Then came Arya’s big moment. Would she run to find Brienne? Would she mercy kill the murderer who unexpectedly became her friend and father figure?

In incredible pain and marked to die The Hound essentially begs her to end his suffering. Failing that, he tries to provoke her, recounting the murder of her butcher boy that got him added to her list, and claiming he regrets not having raped Sansa when King’s Landing was under attack. (To that my mom tsked audibly.) But his words have the opposite effect. Arya is no longer quick to anger. Her face is inscrutable as he speaks. And finally, after snatching away his purse, she leaves him to die, slowly and in agony. Arya has become a cold, merciless survivor. And now she’s headed to Braavos. Her survival and setting out on her own course makes a strangely hopeful note to end a very dark season, punctuated by the airy variant on the opening theme that plays as she sets sail. It’s almost sweet, but the stench of blood remains.

And thanks for watching Game of Thrones with me.