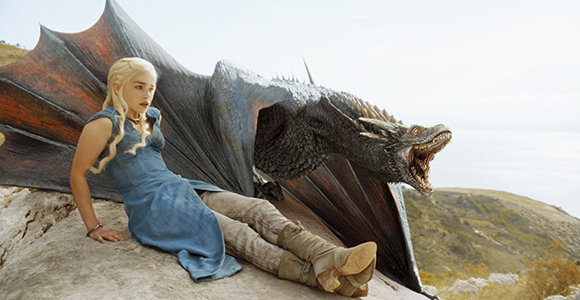 Game of Thrones is back, baby! What did you think of the season four premiere? The Brienne-Olenna scene? The new Daario? Read our recap and sound off in the comments.

Man, even in death Ned Stark can’t catch a break. The long-awaited season four of Game Of Thrones kicks off with Ned’s iconic sword “Ice” being melted down for its rare Valyrian steel by Tywin Lannister. Winterfell is in ruins, its masters slaughtered, its children scattered to the winds. And now the last intact legacy of the Starks, following their home, family and honor, has been destroyed to make a blade for the crippled Kingslayer, and…who else, exactly?

The second forged was a smaller sword, so perhaps it’s intended for Tyrion, The Little Lion? Or maybe the pint-sized King Joffrey… though he has Hearteater? Perhaps it’s for Joffrey’s little brother Tommen, who’s rumored to take on a bigger role in the Game this season? Though Jamie might have asked as much in this rare moment with his father, he instead focused on rallying for his dignity and his position on the Kingsguard. He’s a changed man. Tywin knows it and distrusts his former golden boy for it, saying outright, “You’ll never be as good.” (Ouch.) Still, it’s thrilling to see one of the Lannister children do more than sulk before their father.

This is a time for debts to be paid. For marring his first-born son, Tywin destroys the last thing of the Starks that he can. But as the new-to-the-field Dornish Prince Oberyn Martell (Pedro Pascal), lays down, “The Lannisters aren’t the only ones who pay their debts.”

This premiere episode’s key theme concerned debts owed and paid. For this sneering (and seemingly bisexual) noble that means spilling some Lannister blood as revenge for the rape and murder of his Targaryen-marrying sister Elia and her children. Even though he’s threatening my beloved Tyrion, I like Oberyn. With the help of outspoken lover Ellaria Sand (Indira Varma), he should bring a fresh sense of menace and twisted fun to King’s Landing.

Though separated, Jon Snow and Ygritte are both paying for their traitorous tryst, each incurring the scorn of their commanders. Luckily for them (and us), each are too great a warrior to be killed on principle–especially when a major battle between the Wildlings and the Crows looms on the horizon. But with an ugly bunch of cannibals joining her ranks, Ygritte’s fated reunion with Jon Snow should be the least of her concerns.

Across the Narrow Sea, we rejoin Daenerys Targaryen and her dragons on the road to Meereen, a new addition to the pop-up opening credits. Her beastly babies are bigger than ever, but she learns a dragon’s loyalty is not as steadfast as that of the Unsullied, who owe their freedom to her. When Dany interrupts a feeding session, the biggest literally snaps at her.Thus Ser Jorah warns her dragons can never be tamed, “Not even by their mother.” That’s ominous, but this adage could well speak to Dany herself, who refuses to be wooed by the many men who serve and crush on her.

Poor Jorah. That shiny new mercenary Daario Naharis is already faring better with her than Jorah ever did. Swapping from Ed Skrein to Michiel Huisman makes a world of difference in explaining Dany’s attraction–reluctant though it may be–to Daario. Skrein’s Daario seemed sleazy and slippery with his pretty boy looks and easy smiles in such dangerous lands. Huisman’s portrayal is less flamboyant, and this steelier, more rugged take already plays better in this setting.

Leaping back to King’s Landing, Brienne of Tarth is surrounded by families who could rightly want her dead. First, she presents herself to the Tyrells to recount the true cause of Renly Baratheon’s death to his widow, Margaery. (Smoke monster with the face of Stannis, lest we forget). But Brienne doesn’t seem to have any reason to fear this family. After all, the Tyrells are in their greatest position of power yet, since this clash of kings began.

As for the Lannisters, Brienne’s unlikely alliance with Jaime has so far shielded her from retribution for his capture and subsequent “unhanding.” In fact, she’s so secure in their friendship that she presses Jaime (née Kingslayer) on the promise he owes her: the safety of the Stark girls. But with Catelyn Stark slayed, Sansa married to Tyrion, and Arya dead as far as he knows, what is there to be done? Brienne doesn’t seem satisfied with this answer, and something tells me the matter is not resolved for Jaime either.

We pick up with Sansa mourning her brother, mother, and sister-in-law by means of a hunger strike. She’s rebelling in the only way left to her, and notably one often taken by teen girls who feel powerless. While Shae and Tyrion (and possibly Jaime?) are meant to be watching out for her, they are a bit too distracted sniping at each other. (And none too quietly, as they are easily overheard by one of Cersei’s spies.) Thankfully, Sansa’s goodness has won her one ally. Behold the return of Ser Dontos Hollard!

In season two he was the bumbling knight who dared to come drunk to King Joffrey’s name day tournament. It was Sansa’s manipulations of Joffrey’s pride that saved Hollard’s life, and he means to thank her by giving her his mother’s necklace. Long has Sansa dreamed for a knight to rescue her for this ornate prison. But it never turns out as she’d hoped. First she had the hideous Hound offer to sweep her away. Then came hopes of the Knight of the Flowers, Loras Tyrell, being her noble knight in shining armor. Now, she has this dishonored but earnest courtier. Sansa is so in need of a solid ally that this gives me hope. Then I realize how pathetic that her hopes might depend on such a clown. And besides, where the hell has he been all this time?!

The last to pay a debt in this ep is young Arya Stark, who is still safe with The Hound–well, as safe as she can be traveling with the king’s noted coward of Blackwater. Chance brings them to an inn infested by the Lannister men who stole her Needle and killed poor Lommy (The Hound’s one-liner “What the fuck is a Lommy?” should be a t-shirt in an Etsy shop by now, right?). Unavoidably, this massive scarred man and this slight and pretty girl attract the attention of these child killers and rapists. And we get season four’s first fight scene, complete with face and taint stabbings!

While The Hound snatches up the battle’s heavy lifting, Arya gets her revenge. Not only does she kill the man who murdered her friend, she taunts him by repeating his wicked words that once haunted her. I was conflicted here. I love seeing Arya kick ass, but she definitely savored the kill, which is something we don’t tend to see the Starks do. She’s going down a dark path, and it’s hard to guess where it will lead her. But for now, she’s headed to the Vale, bonded by battle to The Hound, and with Needle restored and a pony of her own. The episode closes with this deadly duo riding off into the murky mountains toward the Vale, while far away Dany’s army rides to Meereen, where the slave holders will pay for every single crucified slave they’ve left like breadcrumbs for the Stormborn.

We’ll have to wait until next week (at least) to see what’s become of Bran and Jojen, Osha and Rickon, and everyone’s favorite odd couple: Theon and Ramsay!