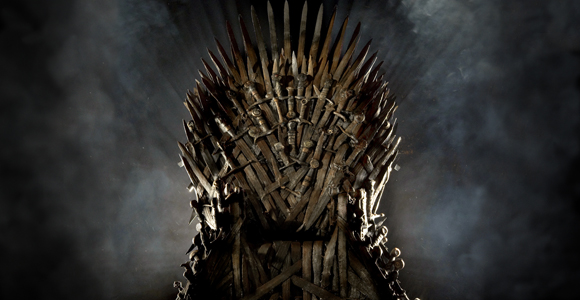 As of today, we are one month out from the premiere of Game of Thrones‘s fourth season… unless you’re one of the lucky ones who snagged a ticket to a special Brooklyn screening, in which case you’re only two weeks out. In the meantime, let’s read about a Game of Thrones rap album and Kit Harington accidentally watching his season three sex scene with his parents.

First, the rap album: Game of Thrones fans like their musical tributes (Rage of Thrones, A Character I Used to Know), but what sets rap album Catch the Throne apart from its brethren is that it’s an official, honest-to-God-paid-for-by-HBO release. The “mixtape” will featured the musical stylings of 10 hip hop and Latin music artists, including Big Boi, Common, and Wale, all with the objective of “encourag[ing] more rap fans to watch the show” and “reach[ing] out to the show’s urban, ‘multicultural’ audience,” according to the Wall Street Journal.

Here, have a lyrical sample:

I’m tellin’ whoever messin’ with me
I can bring you that Khaleesi heat
Use my King, knack for words, as an actual sword
I can decapitate a rapper…

HBO is releasing Catch the Throne tomorrow, and it’ll be free, and I’m going to download the bejeesus out of it.

Costing more than Catch the Throne‘s $0 price tag, but not much more: An advance screening of the season four premiere, taking place on March 20th at the Barclays Center in Brooklyn. It costs $15, and tickets went on sale today via Ticketmaster. The site says there are “not many” tickets left, which equates in my head to “some tickets left,” but when I went through the process of purchasing (of course), I was told “High demand! No matches…” Sigh. The screening takes place in walking distance of my apartment, so I might have to crash the place like Frey soldiers crashing a certain wedding. In addition to seeing the premiere early, the 7,000 attendees will get to experience “costumes and props displays from the acclaimed traveling exhibition, photo ops on the Iron Throne and other special surprises.”

The Lannisters send their regards.

Finally, for the sex: Kit Harington, aka you-know-nothing-Jon Snow, told Austrlian radio station Nova FM that he accidentally sat down to watch his season three sex scene with his parents. “I don’t know why I watched that episode with my parents, but I did… Mum made an awkward excuse to get out of the room, saying ‘I, umm, I gotta, umm, I think I can hear the kettle boiling,’ before nipping out… Dad was just chuckling. Dad was like, ‘There’s my boy.'”