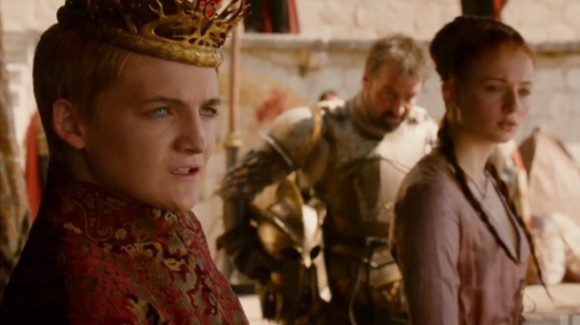 Oh god, King Joffrey is going to be SO pissed about this. According to Forbes, HBO’s Game of Thrones Season 2 is going to be the most pirated show this year. Not exactly a title any show wants.

“With its popularity swelling and no easy way to watch for viewers without cable, HBO’s hit series Game of Thrones is inspiring massive levels of piracy, according to numbers from the BitTorrent-tracking and analysis firm Big Champagne,” writes Forbes. “By the firm’s rough estimate, the second season of the show has been downloaded more than 25 million times from public torrent trackers since it began in early April, and its piracy hit a new peak following April 30th’s episode, with more than 2.5 million downloads in a day.”

John Robinson, a senior media analyst for Big Champagne says it’s too early to tell but the popularity rankings on the download site Pirate Bay mean Game Of Thrones is a favorite. “The fact that it’s consistently at the top of the Pirate Bay’s top one hundred TV show chart seems like a pretty in-your-face leading indicator of the huge volume at which this is being shared,” he said.

Last year, Game of Thrones came in second only to Showtime’s Dexter but this year they consistently have the lead. Forbes makes sure to note the sites they looked at aren’t the only illegal download spots and many are tougher to track.

“While Game of Thrones filesharing rates are probably driven in part by its appeal to the young, geeky male demographic that’s most prone to using torrent sites, HBO hasn’t helped the problem by making the show tough to watch online for the young and cable-less,” writes Forbes. “The show isn’t available through Hulu or Netflix, iTunes offers only Season 1, and using HBO’s own streaming site HBO Go requires a cable subscription.”

“This is absolutely a reaction to the show’s not being available elsewhere online,” said Robinson. “It’s a very tricky game trying to create this kind of scarcity.”

Would it be nice if HBO came up with a legal online viewing option for their network’s properties? Something you didn’t actually have to have cable for but could pay to watch elsewhere? Yes. Should we be blaming them for people stealing their content? No. People pirating is just that. People making the decision not to wait for the show to come to DVD or pay for the privilege to have it in their home. We’ve heard a lot of people have been dropping cable in favor of things like Hulu but just because you choose not to access what’s available to you doesn’t make stealing ok.

It’s interesting to hear the types of reasoning people have for this type of behavior too. Forbes pointed to a Game of Thrones reddit thread where users who have pirated the show, discussed why they did it. A good number of people said they never would have gotten into the show if they hadn’t pirated it first but actually wound up purchasing the DVD after the fact. There’s also some who just want the episode available digitally on their computers but still pay for HBO and buy the discs and international users who have different issues altogether.

Personally, I think one of the biggest issues with piracy of this kind is people want the content immediately. Yes, they could simply wait for the DVD to be released but they don’t because they want it while everyone else is watching it. If they can’t get it instantly by legal means, they’ll get it instantly by illegal means. It honestly makes me concerned for a show like Game of Thrones because their survival depends on HBO subscriptions.