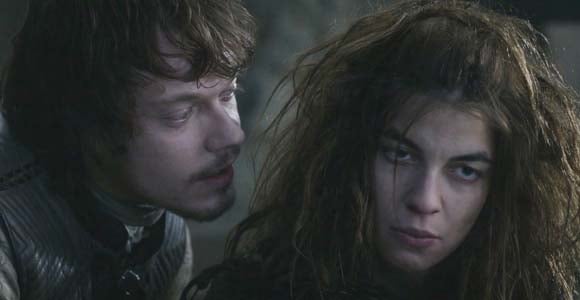 I understand the job of an actor is to dive into each role wholeheartedly and bring the character to life but there are times when an individual you’ve come to know in one sense takes on a role on the opposite side of the spectrum. For instance, Natalia Tena. She’s done a lot of work in her time but my first time seeing her was in Harry Potter and the Order of the Phoenix playing Nymphadora Tonks. The next role I saw her in? As the wildling Osha in HBO’s Game of Thrones. She does a fantastic job on GoT but she’s had to do a few things that made me never be able to look at Tonks the same way again. Without getting too specific before the jump, the actress doesn’t have a problem doing what the role calls for, she just wishes male actors had to do the same more often. [Warning: coarse language about the human body.]

Even if you don’t watch Game of Thrones, you’ve probably heard talk about the extensive showcasing of the female body. There has been full frontal male nudity on a few occasions but women on the show are naked, or partially naked, a great deal.

Tena spoke with The Independant about a scene from the second season of the show [SPOILERS] in which she strips completely naked, in order to distract Theon Greyjoy for a time, and allow herself and the children of Winterfell to escape. Now, the need for this particular scene has been argued by fans but Tena was fine with it.

Then she told them she asked the creators about wearing a pubic wig (merkin) for the scene or growing out her natural hair. In all honesty, I had no idea what that area looked like on the show because I was too busy averting my eyes after seeing Tonks naked. But here’s what Tena had to say:

“I was a bit upset about the fact that they showed my minge without hair because I think my character would have a massive bush,” she said. “I would have muff, like a muff coming down the thighs.”

Gotta say, I 100% agree with her. Why would a wildling woman (who doesn’t even brush her hair), have her crotch area in a manicured state? Regardless, Tena was more concerned with the fact that she and other women are constantly asked to remove clothing for a role but men are rarely asked to.

“There’s that in everything in the world. I think it’s really unfair, every actor, any actress has had her t-ts out. Every single actress I know,” she said. “Blokes it’s like, let’s see some @#$!. Do you know what I mean? Let’s make it more even.”

While reading through the interview I also discovered the actress is a fan of the books by George R.R. Martin and has similar thoughts to the author himself about the ending. “I’m really terrified that he’s not going to write the last one for ages. I’m just terrified,” she said. “I can’t wait that long. I need it now in my life. But now I think the pressure might be on.”