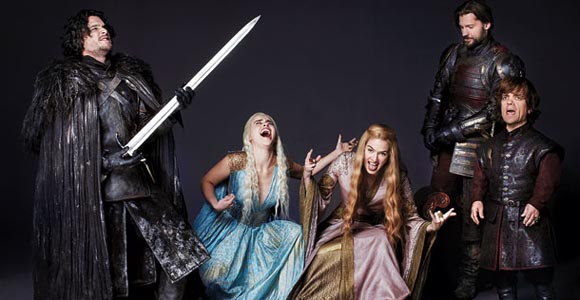 Every week I sit down to watch HBO’s Game of Thrones and every week I’m shocked when the credits roll. The episodes go by incredibly fast but that’s a testament to their quality. But fans will get an extra treat this coming Sunday when the finale airs, and that treat is several more minutes of running time for their favorite show. Hit the jump to find out just how much more Thrones you’ll get this weekend!

I know, it’s not a whole lot but I’m sure you’ll be thankful for it all the same come Sunday night when you’ll likely still find yourself sprawled on the floor when the credits pop up.

The fansite HBO Watch were the ones to reveal the news. Much like HBO gave producers/writers David Benioff and D.B. Weiss 15% more money for “Blackwater,” they’ve granted them more time for the finale. The site says the episode will run 64 minutes as opposed to the normal 54-55 minutes. You can confirm for yourself on HBO’s schedule.

They also reminded readers, as will I, that you should double…no, triple-check your DVRs to make sure the extra minutes get recorded. The last thing you want is to settle in for your finale party and have the show cut off at a climactic moment. And you can bet with ten minutes left, all you’ll be seeing are cliffhangers.

If you missed our recaps of the penultimate episode, Sunday’s “Blackwater,” check out both our Veteran and Newbie takes on it. Next week’s episode is titled “Valar Morghulis,” something fans of George R.R. Martin’s A Song of Ice and Fire series know all about but that viewers will have to look forward to in the coming seasons. And in case you missed it, here’s the promo for the finale (with the episode description after the vid in case you want to avoid all spoilers).

Episode description: Tyrion awakens to a changed situation. King Joffrey doles out awards to his subjects. As Theon stirs his men to action, Luwin offers some final advice. Brienne silences Jaime; Arya receives a gift from Jaqen; Dany goes to a strange place; and Jon proves himself to Qhorin.