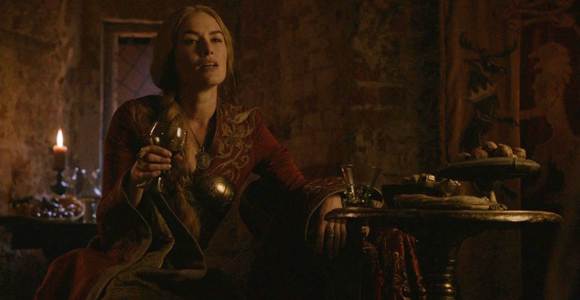 Editor’s Note: And here’s our newbie recap for last night’s dramatic episode of Game of Thrones. (You can find the veteran recap here.) Read on to see what our own office manager, Sarah Devlin, thought of the show this week!

Since last week’s episode, I’ve started watching the series from the beginning. Being spoiled on some of the major plot developments hasn’t prevented me from thoroughly enjoying the first season, and though I’m not caught up yet, at least I know everyone’s names this time. So, without further ado:

We pick up exactly where we left off last week, as Stannis’s army approaches the shores of King’s Landing and things get ever closer to popping off. Tyrion, in bed with Shae, is jumpy and nervous, not to mention a bit resentful of his role in this mess. Shae does her best to comfort him. Meanwhile, an adviser visits Cersei in her chambers and gives her a bottle of nightshade, explaining the effect of one drop versus four or ten. The implication is should she need to commit suicide, or euthanize someone else, she’ll know exactly how to make it happen.

Soldiers are preparing for battle by drinking and singing and hanging out with prostitutes, until the Hound drops by and breaks up the party. He and Tyrion’s hired soldier are about to come to blows when bells begin to ring, signaling that Stannis’s army is upon them. Tyrion gets fitted for armor and the spider tells him that he believe he is the only person who can stop Stannis/lead the city’s troops against him (the alternative being the useless Joffrey, I suppose).

Speaking of Joffrey, he’s heading off to battle, where he runs into Sansa, accompanied by Shae, who is on her way to be sequestered with the other noble ladies and the queen. He presents his new sword to her and asks her to kiss it — get it? He’s the worst. As the archers man the battlements an empty ship is sent into the middle of Stannis’s fleet, and once it’s lit on fire by a flaming arrow it becomes clear that it’s some kind of medieval/magical explosive. Undeterred, Stannis and company land on the beach and set about trying to storm the castle walls.

Meanwhile, in the red keep, Cersei is getting hammered and being mean to Sansa, ordering her to stop praying to the gods for mercy, since they don’t care. She’s wearing a metal breastplate and reminisces about how she and Jaime used to look exactly alike, but Jaime learned how to defend himself while she was “sold” to King Robert. But she was his queen, Sansa protests. “And you will be Joffrey’s. Enjoy,” Cersei sneers in response. Even she seems aware that her son is terrible.

The first wave of Stannis’s army has been slowed by arrows, but they still manage to get a battering ram going and start to breach the gates. There’s lots of squishy-sounding, bloody fighting. 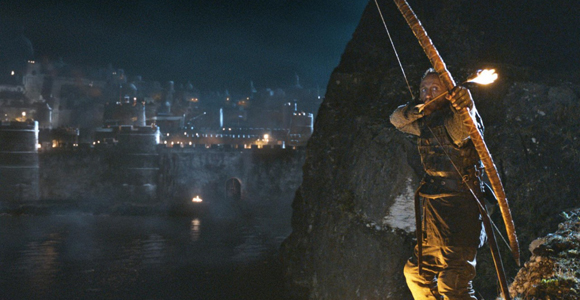 In the keep Cersei zeroes in on Shae, who is trying to pass herself off as a handmaiden but is quickly betrayed by her lack of curtseying skills. We learn that the scary-looking guy hanging out with the ladies is there to kill all of them if Stannis succeeds, ostensibly so that no one gets raped but also because the queen seems to have gone a little crazy. Also, Lena Headey is giving off some serious twitchy Keira Knightley vibes in this episode.

The Hound sees the gates being breached, uncorks some wine and gives up. When Tyrion asks what he’s doing he says “Fuck the king” and bounces. Not long after that Joffrey hightails it back into the castle at his mother’s behest, and no one is left to rally the troops. No one but Tyrion, who comes up with the idea to go through a grate in the castle wall and sneak up on the troops on the beach from behind. The men rally around this idea.

When news that Stannis’s troops are at the gates reaches Cersei, Shae tells Sansa she must leave, go to her quarters and bar the door, since Stannis won’t hurt her but the hired goon probably will. She leaves and finds the Hound drinking in her room, wanting to escape to a place that “isn’t burning.” He offers to take her home, and scoffs at the idea that Stannis won’t harm her. Sansa seems to trust him, and he opens the door and pauses, an open invitation.

Initially Tyrion’s plan works perfectly and they overwhelm the troops on the beach, but he turns and sees a second wave of soldiers descending upon them and sighs “Oh, fuck me.” He is dealt what might be a fatal blow, and slowly sinks to the ground, barely registering a third wave of nattily dressed soldiers on horses joining the fray.

Cersei sits with her youngest son on the iron throne, telling him a story about a young lion who will grow up to be feared by the “stags and wolves and foxes” of the forest. She gently uncorks the nightshade and is poised to make him drink when the doors are thrown open. She stands up, not sure who is there. And it’s…

Tywin Lannister!!!!! “The battle is over,” he tells her, and that’s the end of the episode. WHAT. THAT WAS AWESOME.