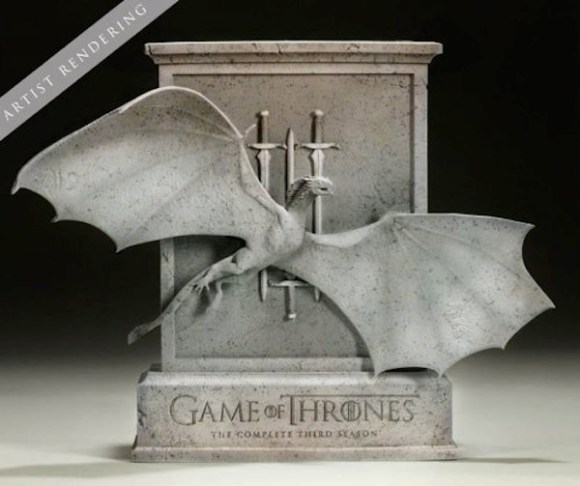 Okay, the dragon on this limited edition season 3 Blu-ray/DVD box set can’t engulf your enemies in flames. Still, the planned look of the new Game of Thrones set is quite fun, taking the coolest part of the Season 3 marketing campaign, the dragons’ shadows, to the next level. The set, which also includes a digital copy of the season, is $104.99 on Amazon, so it turns out that even inanimate dragons are quite expensive. Plus, the image above is only an artist’s rendering, so the design could change a bit. Still, a dragon seems like an effective way to guard precious Game of Thrones DVDs, and the resemblance the box set bears to a grave stone definitely lets you know what you’re getting into before you hit the end of the season.

Available exclusively on Amazon, you can pre-order the set now in advance of its February 18, 2014 release.