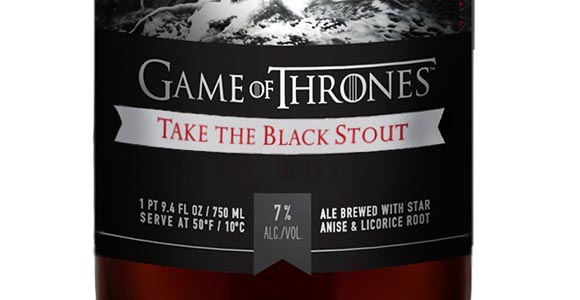 Don’t forget, you can’t have a girlfriend when you dedicate yourself to the Night’s Watch, but you can sure as hell drink. Hit the jump to check out the cool label for HBO and Brewery Ommegang’s second Game of Thrones beer.

We had the pleasure of tasting the first entry in the Game of Thrones beer collection, the Iron Throne blonde ale, and were eagerly anticipating the follow-ups from Ommegang. Today, HBO revealed the label art for “Take the Black,” a stout. It features a Weirwood tree, much like the one Jon Snow took his Night’s Watch oath in front of. The one critique I had of the first beer was they didn’t go far enough with the theme (I thought it should have been called Lannister Blonde Ale) so I’m glad to see this one makes more sense from the show’s standpoint.

Interesting fact from HBO, “It’s an original design created specifically for the bottle by a52, the studio that created the title design for the show’s opening credits.”

You’ll be able to get your hands on it this fall.