Exclusive: Bitten’s Laura Vandervoort, “We All Need A Strong Iconic Female Character To Look Up To” 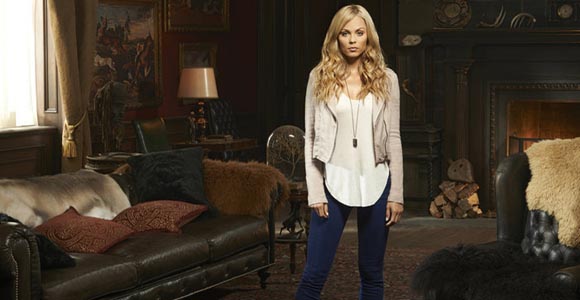 Syfy’s latest supernatural series, Bitten, moves to a new timeslot tonight, Monday at 8/7c. The Mary Sue was fortunate enough to grab an email interview with its star, Laura Vandervoort. You may remember her as Supergirl on The CW’s Smallville or Lisa on ABC’s V remake. In Bitten, Vandervoort plays Elena, the lone female werewolf hailing from Kelley Armstrong’s Women of the Otherworld novel series. We asked her about taking on the fan-favorite role, werewolf gender roles, and…the strong female character.

The Mary Sue: Considering how big supernatural creature adaptations have gotten in recent years, was saying yes to this role a no-brainer?

Laura Vandervoort: I was excited at the offer to lead a show and play an incredibly dominant and strong female woman. The hesitancy was truly only the idea of entering back into the realm of sci-fi. Having worked in the genre many times before, I was aware of being pigeonholed and typecast in that genre/world. But after reading the books by Kelley Armstrong and speaking with our executive producer JB Sugar, I realized there was so much more to the show. It was a more adult take on the typical werewolf world, a combination of True Blood and Sopranos. The fact that our cast are also werewolves is really a subplot to the family drama and darkness of the character pasts. The relationships and my character (Elena) dealing with the skeletons in her closet was so enticing to me. I knew it would be a challenging role. Layered and full. Physically, mentally and emotionally.

TMS: Have you already seen reactions from fans of Armstrong’s novel on the show or your portrayal of Elena?

Vandervoort: We were aware of the immense fanbase Kelley Armstrong had for her work, especially the Otherworld series. On top of that, this is a genre people seem to really be responding to right now. After the casting news was announced the fan reaction was wonderful. People truly seemed excited to see how we brought these books to life. We knew people would definitely have strong opinions and ideas of how it looked. After airing, the reaction has been incredible! At conventions, in the media and social media. People really seem to be responding well. We are so grateful for that. I think either way, the cast knew we had given our hearts, souls, blood, sweat and tears to season one. Whether fans thought things were as they imagined or not, we had hoped they would be opened minded to any changes. And they have! We hope to continue to shock them with the content, the characters relationships and the visual depth that is Stonehaven and Bitten.

TMS: Did you read the series to prepare or did you decide to go strictly from the television script material?

Vandervoort: Before signing on, I definitely wanted to read Kelley’s books and research. I wanted to have a true understanding of the world she had created for the fans. I also read “Men Of The Otherworld” to get into the history outside of Elena’s direct world. It was so important for me to read them and understand what we would be creating. The history of the pack, the anthology behind who they are as wolves. For the sake of a TV series, we do have to take some artistic license, so I also read the first two episodes to understand the pace of the show.

TMS: Werewolf stories have been almost exclusively about men, with a few great exceptions (Ginger Snaps, Syfy’s Being Human, to name a few). Do you feel it’s just as easy for women to identify with the “condition?” What parts of Elena do you identify with?

Vandervoort: I think we have seen many adaptations of the “Werewolf” plot… Mostly with men carrying the show and leading the pack. I don’t think it is the same for woman in being able to identify with the “condition” because we haven’t seen it. Woman are complex creatures as it is… Haha. It just adds an entirely new dimension to the traditional werewolf story. There are so many parts of Elena I can relate to. She has a need to belong and be strong. At the same time, she often just wants to blend in and be a part of a world that is often male dominated. Much like this industry I’ve grown up in, I want to be accepted and appreciated and have people trust I can handle the job. But like Elena and most woman… I feel we doubt ourselves on a daily basis and try to “appear” like we have it under control and can take on the world. Elena is constantly searching for who she truly is… I think we all can relate to that.

TMS: Harkening back to some of your earlier work, Helen Slater’s Supergirl was a vivid and vital part of my youth. I imagine there’s a whole other generation of young women who feel that way about your portrayal of the iconic character on Smallville. How does that feel, and did you have a similar connection to a character growing up?

Vandervoort: Helen was and still is an iconic character and Super Hero. I had the chance to work with her on Smallville and receive her blessing for my betrayal of the new Kara Kent/Supergirl. She’s a phenomenal woman with grace and strength. It’s odd for me to think I would have an effect on the new generation of women with Supergirl but if I did/do then I feel honored. There was indeed pressure when I was recreating Supergirl. But fans were wonderful and accepting of what I had done. That was encouraging to see.

I think we all need a strong iconic female character to look up to that encourages us to pursue our dreams. Growing up, Buffy The Vampire Slayer really caught my attention. It sounds silly but the film made me believe woman could be feminine and graceful and yet kick ass and be intelligent at the same time. I had grown up doing martial arts and seeing her on the big screen got me excited for the future ahead for all woman in film. In terms of acting, my role model (like many) is Meryl Streep. Meryl Streep has and always will have, a hold on audiences for her incredible portrayal of women who are flawed and broken but also maintain a warmth, strength and unwavering intelligence!