Neil Gaiman Talks About Fixing The Doctor Who Gender Disparity 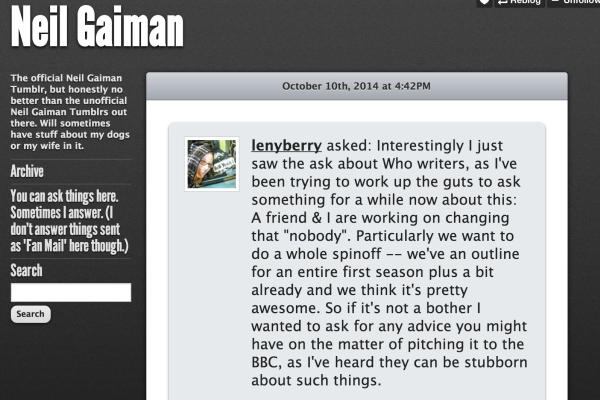 Recently, writer and personal hero Neil Gaiman expressed his displeasure on Tumblr about the complete lack of female writers on Doctor Who. Now, he’s giving some practical advice on how we can fix that.

Tumblr user LenyBerry asked Gaiman what his advice would be for someone looking to pitch the BBC with a Doctor Who story, spin-off, or script idea. Here’s Gaiman’s advice:

I’m thrilled that you want to write for Doctor Who. It definitely needs some women writing for it.

If you’re serious — and I assume you are: the BBC can be stubborn, yes, but possibly not as stubborn as you imagine. They really want writers. They may be more stubborn about Doctor Who, mostly because it’s their flagship show. If they are hiring a writer, they want to know that they are hiring someone who can do it, who, having pitched a great idea will, at least, turn in a script that they can shoot.

So my advice to anyone who really wants to write specifically for Doctor Who would be, write stuff that’s going to get you noticed, write stuff as a calling card. Write plays. Make fantastic, well-written, small cheap films with friends, write short stories and books and comics, do things so that when you ask to write Doctor Who they get excited. It’s the BBC’s flagship show, and if you are going to write an episode, make them want you.

Gaiman goes on to say that writing for the BBC isn’t (and shouldn’t be) about “who you know,” but rather about your talent level, and that the BBC actively wants new writers and new voices. Gaiman also clarifies that his original note about women writers was “wistful,” and not at all to be interpreted as “an attack on the Doctor Who team or anyone on the team” because Moffat is, like, totally trying, guys:

In the six years I’ve been working with the Doctor Who team, the producers and script editors I’ve directly worked with (four out of six of whom have been women) have had a lot of attention on getting women writers onto the team. They’ve reached out to a lot of women writers — I know that Steven Moffat has personally been in touch with a lot of female writers and been defeated over and over by scheduling problems, and people saying no, and been as frustrated as anybody (probably much more frustrated as he’s the one reaching out). It’s a priority for them too.

Gaiman recommends checking out the BBC Writersroom program, which will read any and all unsolicited scripts for film, radio, TV, or stage. Ladies, getting your write on and start submitting. Silence knows the show needs it.

If you were going to submit an episode of Who to the Writersroom, what would it be about?