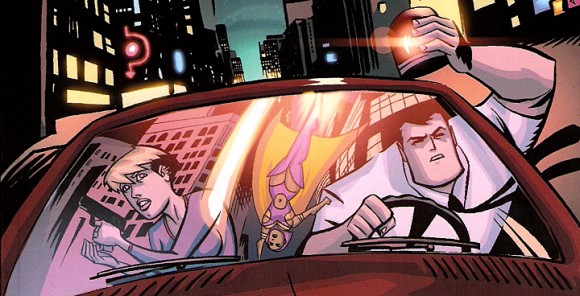 We haven’t heard anything from FX‘s Powers series in a while, and maybe that’s a sign of how well shooting has been going. While FX hasn’t completely ruled out picking it up for series, it is making the comic-based show undergo some major surgery before giving it another chance. However, according to Powers co-creator Brian Michael Bendis, this is not bad news at all. In fact, it shows signs that the network is actually interested in giving the show a chance.

This latest Powers information came with the official news that FX has officially passed on another series, Outlaw Country, but is giving Powers another shot at a pickup by pouring some more money into it for a retooling. At least, this is the impression that Bendis is getting. He explained on Twitter, saying the same trick worked out great for another FX hit:

network spending more $$ on powers is good. they did the same to the sons of anarchy pilot. fx sees pilots diff then reg networks.

He went on to say that discussions with FX were going “great,” apparently easing the minds of all the hopeful fans who were eager to see a TV series based on the creator-owned comic. Powers, which was created by Bendis and Mike Oeming and was published through Image Comics from 2000 to 2004, is a crime procedural that mixed the superhero and fantasy genres. This live-action adaptation had cast Jason Patric as Detective Christian Walker and Lucy Punch as Deena Pilgrim (plus Carly Foulkes aka the T-Mobile Girl as Retro Girl). No word on the retooling affecting the casting, but it sounds like this is a new beginning for Powers.