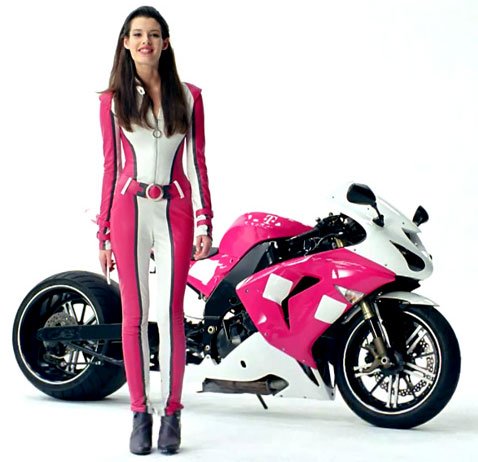 Recognize that girl? She is often seen wearing pink and spouting very-useful-information about T-Mobile phones and such. Her name is Carly Foulkes, and she might finally be recognized for much more: it was just announced that she will be playing Retro Girl in FX‘s Powers series. Finally! She will get to do things besides stand around on a white set and make other people look stupid.

For those familiar with Powers, the first story arc is focused on who killed the popular superheroine Retro Girl, with homicide detectives Christian Walker (Jason Patric) and Deena Pilgrim (Lucy Punch) investigating the murder. The good news for Foulkes is that this will obviously be told in flashbacks, and while she may not be a permanent fixture in the cast, this is a plotline that will give Foulkes a lot of exposure. Prior to her T-Mobile commercials, she modeled for Ralph Lauren, Elle Magazine, and Tommy Hilfiger.

You might recall another T-Mobile commercial actor who went on to star in a very popular NBC sitcom: Danny Pudi got caught butt-dialing before being cast in Community:

We can’t wait to see what T-Mobile will do for more up-and-comers like Eric Clapton. Oh, wait. He’s already Eric Clapton.