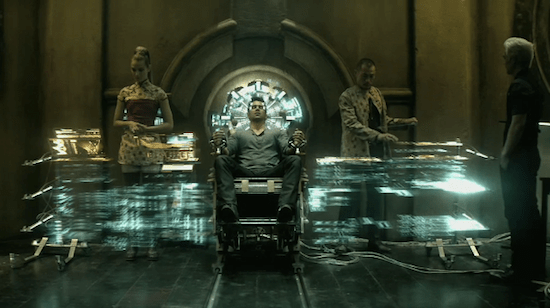 The first full-length trailer for the impending Total Recall remake debuted over the weekend, no doubt prompting some to think it was an elaborate April Fools’ joke. However, the movie is legit and for the first time we’re finally getting a look at more than a few seconds of the film.

Like the teaser trailer, there are explosions, Philip K. Dick-style questions about identity, flying cars, and a dystopian landscape. Somehow, there are even more free-falls than the 30 second clip. Perhaps the biggest reveal is CG Colin Farrell fighting clone troopers, or something. Readers will recall from our coverage of the teaser that this new version of the film will actually not take place on Mars, but appears to be set in a Blade Runner-esque future megacity.

Though titillating, this new trailer does seem a smidge less atmospheric than the teaser. That said, I’m always happy to see more P.K. Dick stories on the big screen so I’ll keep my expectations hovering around “cautiously optimistic.”