What Did Science Find in Fossilized Shark Poop From 270 Million Years Ago? 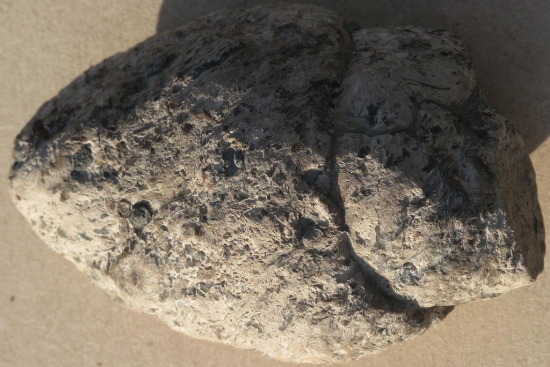 270 million years ago, a shark pooped near the coast of Brazil. That poop was fossilized and preserved into a coprolite, which is the scientific term for fossilized poop. Scientists found that shark poop, and have been carefully studying it. We don’t know exactly what they were looking for, but we do know what they found — and it’s gross.

By carefully dissecting the shark poop into thin cross-sections, paleontologist Paula Dentzien-Dias of the Federal University of the Rio Grande found a group of 93 tapeworm eggs. The eggs are so small, about one-and-a-half times as wide as a human hair, and only found in one section of the coprolite sample.

“Luckily in one of them, we found the eggs,” said Dentzien-Dias. Lucky indeed! Where would we be without this story of fossilized tapeworm eggs inside fossilized shark poop?

The coprolite dates back to the Paleozoic era, before even the dinosaurs. That puts these tapeworm eggs at about 140 million years earlier than any intestinal parasites found in vertebrates, meaning they’ve been a problem for much longer than previously thought.

They can’t tell which species of shark dropped this coprolite, because the intestinal systems of all shark species are too similar to be able to differentiate them by poop alone. It is also not likely that the parasite was what killed the shark, unless it was a massive infestation, but then it stands to reason there would be a lot more eggs in the sample.

Dentzien-Dias and her team have over 500 other coprolite samples to study. That’s a lot of shark poop to slice.

(via Live Science, image via Kathy_)