Exciting and Pretty Excerpt From Neil Gaiman’s Fortunately, the Milk

Reportedly the most exciting book since Tolstoy's War and Milk. 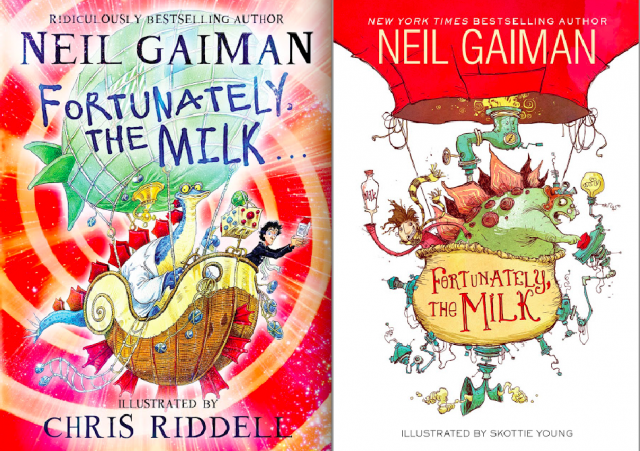 Today in Neil Gaiman news: HarperCollins has revealed new pages of Fortunately, the Milk, Gaiman’s silliest (and likely most child-friendly) book yet on digital publishing site issuu. And not just the text itself, but the cute margin drawings and Alfred Bester-esque typography. Guys, it’s kind of awesome.

Fortunately, the Milk, set to drop September 17, was inspired by Gaiman’s realization that fathers don’t get a fair shake in fiction, and he was rather sick of them dying pre-story to keep things interesting. In his own words:

I decided that I was going to write a book in which dads get to do all of the really cool, important, and exciting things that dads normally get to do on a daily basis– like get captured by pirates, rescued by a stegosaurus– a time-traveling stegosaurus in a ballon, captured by people in a jungle who are going to sacrifice you to Splaud, a volcano god and god of people with really short, funny names, go into the future and meet magical ponies, get attacked by wumpires, there’s spaceships involved, there’s even a bucket of piranhas, and I thought I would put all of those in and also have a book in which a dad got to do the important, dangerous thing which dads get to do most of all: which is go down to the corner shop and come back with some milk.

Given that description, here are my feelings:

So far it delivers on what has been promised: zany incidents written in that charmingly straightforward style Gaiman has, as if Hemingway and Peggy Parish had a socially awkward child. Plus, the artwork is gorgeous, little illustrations mixed through the text, with the words running away, synesthesia-style.

Rather than attempt to describe the new pages without rambling too much, I’ll just say: Check it out for yourself here.

I might be 21, but I still kind of want my dad to read this to me when it comes out.