Allow me to present two vignettes from my life.

The first is me in my early days of playing World of Warcraft (I can happily say that I’ve been clean for two years now). I am looking at the official website, perusing high-tier armor sets. I am irritated, though resignedly unsurprised, to note the female version of several sets, despite having the same stats as the male sets, are low-cut and missing midriffs.

The second is in the company of friends at a burlesque show in San Francisco (come to think of it, a few of those friends were guildies). I am leaning over the balcony railing, my cup of absinthe sloshing precariously as I loudly voice my approval for an innovative use of tassels that is totally blowing my mind.

Contradictory? Not at all.

We all know that female armor sucks. This is an argument that has been going around the geek community forever (or at least since the 1st Edition Dungeons & Dragons strength cap for female characters). I don’t need to tell you how impractical it is to go charging into melee combat with your vital organs unprotected, or how high heels are the absolute worst shoes you can wear if you want to do anything other than stand around and eat canapés. The utter absurdity of the wardrobes belonging to female characters is established fact. The argument nowadays tends to center around how best to solve the problem.

When we get angry about the portrayal of the female form – especially when it comes to clothing – there is a misconception that in order to create a “strong female character,” you have to chuck sexuality out the window. As much as men and women may argue about this point, I have observed that women are often just as divided amongst themselves, if not more so. This goes far beyond geek culture. For every Andrea Dworkin, there’s a Nina Hartley. For every pair of Birkenstocks, there’s a pair of stilettos. For every woman who decries lipstick as a tool of misogynist objectification, there’s another who lauds her implants as two double-D symbols of her own empowerment.

And then there are those like me, who fall somewhere in the middle.

So, ladies – and gentlemen, too – let us put aside our differences for a moment, because I believe there is a common cause for why we get pissed off about heroines with heaving bosoms and unprotected midriffs (though many of my examples will be from video games, the core issue here applies to comics and film as well).

It’s not about the sexuality. It’s about narrative disconnect.

Consider the now-infamous redesign of Harley Quinn. After skillfully slapping Harley’s clothing (or lack thereof) on a man, artist Jess Fink wrote, “If I saw this on the cover of a comic I would pick it up. HOWEVER I would assume that the comic would be FILLED with sex.” That, right there, is the problem. We look at that picture, we think about what we know of Harley Quinn, and our brain misfires.

Now, of course, there’s no reason why a supervillain couldn’t wear a badly-laced corset, if she so chose. After all, the ladies I’ve cheered on at burlesque shows certainly have day jobs. But those ladies get changed before they head into the office. We are being told that Harley Quinn wears this outfit to work. Which, in her case, is fighting Batman.

Now, that is not to say that bared skin and exposed breasts on female characters should be shunned at all times. In my view, Morrigan from Dragon Age: Origins is a perfect example of when it’s okay to put one of your heroines in something revealing. I know her constant verbal sniping drives some players up the wall, but Morrigan is one of my favorite NPCs of all time. For those who haven’t played the game, Morrigan is a “witch of the wilds” – a shady, acerbic, morally ambiguous spellcaster whose true motives for helping you out are constantly up in the air. Before you showed up, she and her devious mother, Flemeth, have been kicking it in the woods, killing Templars and clergy for the lulz (this is alluded to in Morrigan’s costume as well; her patchwork skirt is made from leather belts). Morrigan is also one of the romance options for male player characters, and she is fiercely in control of her own sexuality. Though she flirts and pays a few coy compliments, you always get the sense that your relationship is entirely on her terms. One way or another, she will walk out on you at the end of the game, because she’s got her own priorities. 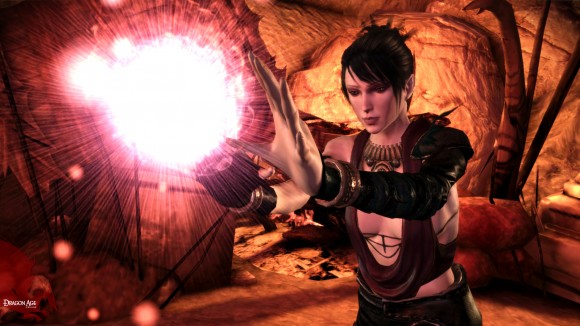 To me, that works. Everything about her appearance, even the very little coverage she’s got going on up top, meshes with what I have been told about her. She’d look absurd in plate mail (as she says later on in the game, while staying with you in a nobleman’s estate, “If one more servant asks if I would like a change of clothes, I will set the house on fire!”). And to be fair, if I’d spent my entire life running around in the woods by myself, you can bet your boots that I’d spend most days topless (weather permitting).

So then, what’s the problem? If Morrigan can have her girls out on display because her characterization offers justification for it, then why can’t we argue that the same is true for all scantily-clad female characters? Why can’t we give them a free pass to wear whatever the hell they want?

This is where it comes back to most people’s initial problem with female armor: the practicality of it. On a purely functional level, Morrigan’s a mage. She doesn’t need heavy armor. We have been told what her role is in combat, we have been told about the nature of her character, and her look corresponds with both.

Take a look at this screencap from the official website for Torchlight (which, honestly, is a crazy fun game that I highly recommend). This is a game in which the characters are defined by nothing but their class abilities. Do you notice anything…out of place?

The argument some folks will put forward at this point is the one of the “target audience.” It goes like this: games are primarily played by straight men, and therefore the advertising and the game content caters to them. The women in video games (or comics, or sci-fi/action movies) aren’t wearing much clothing because that’s what straight men like to see (as one fellow on Vent put it, many years ago, when asked about his female player character: “If I’m going to be staring at an ass all day, I want it to be a girl’s”). The rest of us need to just suck it up and deal, because games weren’t made for us in the first place.

And you know what? On some level, I’m fine with the concept of giving your audience something pretty to look at (though I think it’s highly unfair to say that all straight men subscribe to the same fantasy). Sexual fantasy is healthy, and damning straight men for enjoying the sight of breasts doesn’t make make much sense to me. Male sexuality is not offensive; what ruffles my feathers and the feathers of others is when the attitude surrounding it is lacking in respect and empathy. So if you’re an egalitarian, fair-minded dude who knows how to separate fantasy from reality, then by all means, ogle all the fictional characters you want. You’re a man! You’re straight! Of course you like looking at naked women! That means your junk is functioning normally! Congratulations!

The problem is that when I buy a game (and by the by, I’m handing over the same kind of cash as everybody else), I’m not going out to buy Generalized Straight Male Fantasy VII. I’m sold on the premise of dragons and spaceships and talent trees. I am told that I will be whisked off to an unparalleled, adventurous wonderland, in which heroes and villains and craftable loot await. So when I’m suddenly thrust into a world where the only women are either simpering damsels or sidekicks in perpetual heat, or if I’m made to wear armor that has the exact same stats as the male set but is missing the entire middle section, I do feel marginalized. It’s not what I signed up for. In mild cases, I roll my eyes and keep playing. If the narrative disconnect is particularly prevalent, however, I feel like I’m being made to take an active part in somebody else’s fantasy. And that’s just kind of icky.

So does that mean we should just sweep sexuality under the rug in the name of being fair to all parties involved? Hardly. You can have your cake and eat it, too. You just have to do it right.

One of the best balances I’ve seen between eye candy and strong female characters is from that modern titan of RPGs, Mass Effect. In both Mass Effect and Mass Effect 2, there are strip clubs – flashy, smoky dens of iniquity full of gyrating Asari and surly bartenders. You can go in for a table dance, if you fancy it. You can even lean forward to get a better look.

I was not bothered by this, though I often find in-game strip clubs to be demeaning. In Mass Effect, it was fine. It even made sense.

Part of it was that Mass Effect is one of the paragons (heh, see what I did there) of games with strong female characters. My Commander Shepard was female. I had Tali, Liara and Ashley on the Normandy, ready to kick ass in their own unique ways. The rest of the galaxy was populated by women who were diplomats, reporters, merchants, engineers, doctors and scientists. Why, then, should I be bothered by a strip club? Such places exist. Strippers are a thing, whether you approve of them or not.

If you have Liara in your party when you stroll into Chora’s Den, she quietly comments, “Asari are very comfortable with our sexuality. Some bar owners exploit this for their own profit.” While I imagine some might argue that the “bar owners” are in fact BioWare, I choose to look at this from another perspective. The universe in Mass Effect is, in many ways, very much like our own. There are good guys and bad guys and in-between guys. There are scary things that don’t make sense. There is sex, and people approach sex in all different sorts of ways. Would it have been nice if there was something on the table (literally and figuratively) for players who prefer men? Sure, but you could say the same about such establishments in the real world. I’m not saying it’s perfect, but it sure is a step in the right direction.

To put it simply: if sexuality was there if you wanted it, but you weren’t forced into it.

Which is how I’d like to feel about my armor as well.

Becky Chambers is a freelance writer and a full-time geek. She keeps a blog over at http://otherscribbles.com.