Meet The Whale Who is Forever Alone

It’s a pretty well-known fact that humpback whales communicate with each other through sound. Their sounds are obviously not articulated in the same way as human words, but the species emit sounds–or songs–as a means of communicating to each other in the water. That is, all except for the 52 Hertz whale, who, while also singing, is singing at such a high frequency that none of the other whales in the ocean can hear it. Because of this, it’s spent its entire life in solitude.

Most whales communicate through frequencies between the 15 and 25 Hertz range; the 52 Hertz whale’s vocal sounds come at a frequency more than twice that.

Detecting its strange noises in 1992, the scientists of Woods Hole Oceanographic Institute (WHOI) have been tracking the whale ever since with the use of hydrophones, underwater listening devices originally used to track submarines. They estimate the whale itself to be about twelve years old, and in pretty good health despite its solitary existence.

It’s not only its odd vocal frequency that has rendered this whale forever alone: It’s also its strange migratory pattern. While most whales venture very far north to feed, the 52 Hertz whale migrates up and down the Pacific coast alongside Mexico, the US, and Canada, but journeying no further than Alaska. This means that it is not a part of the pack; according to Now I Know, scientists last detected good ol’ 52 Hertz south of Alaska, “alone as usual.”

It has not been conclusively determined what exact species of whale this is; there’s been some talk that it might be the last of its kind. According to the New York Times, what we do know is that “its sonic signature is clearly that of a whale, but nothing like the normal voice of the giant blue or the next biggest species, the fin, or any other whale for that matter.”

“The fact that this individual has been capable of existing in that harsh environment for at least these 12 years indicates there is nothing wrong with it,” she said. But she agreed that there was something poignant about the finding.

Indeed there is. Our hearts, strangely, go out to this whale who journeys through the ocean in a life of solitude. Maybe it’ll even get his own animated movie or Morgan Freeman-voiced documentary someday.

And now we leave you with the image that has been floating through your head the entire time you’ve been reading this article: 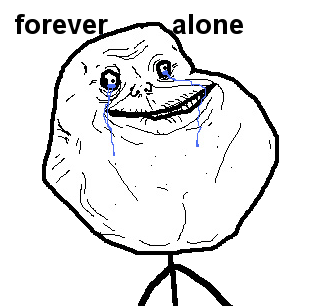