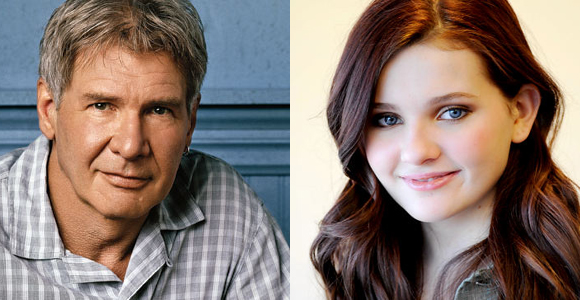 The Ender’s Game movie seems to be moving along pretty quickly now with casting notices popping up left and right. Two more actors have just been confirmed, Harrison Ford and Abigail Breslin. Hit the jump for all the details. Also, crap, Abigail Breslin finally grew up.

We already knew that Ford was in talks for the adaptation of Orson Scott Card’s sci-fi epic but now he’s locked in to play Colonel Hyram Graff, the leader at Battle School. The role was originally offered to Viggo Mortensen, but those negotiations fell through.

Variety reports that Breslin will take on the role of Valentine Wiggin, Ender’s older sister, in the film. You should remember her as the child star who was in Signs, Little Miss Sunshine and Zombieland.

All of them will join Hugo star Asa Butterfield, who’s taking on the title role as well as and Hailee Steinfeld (True Grit) as Petra Arkanian and recently announced Brendan Meyer as Ender’s adversary Stilson. Twilight-made studio Summit Entertainment is co-financing with Oddlot Entertainment. March 15th 2013 is set as the release date.

What are your thoughts on the new cast members? I think they are picking some really great people.