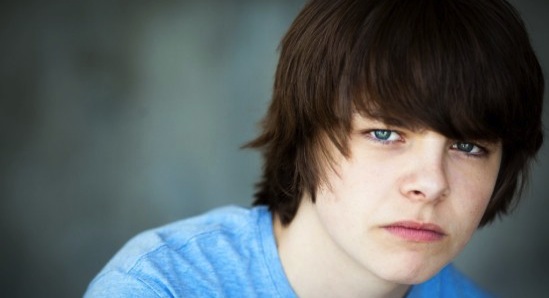 Casting for the film adaptation of Orson Scott Card‘s novel Ender’s Game continues, and producers have found their actor for the role of Stilson: 17-year-old Brendan Meyer, best known for playing the title role of Disney XD‘s Mr. Young. So, in case you were wondering who was going to play that kid who taunts Ender Wiggin, only to meet a terrible fate, wonder no more! It will be this guy. (Plot spoilers after the jump.)

Already popular amongst the teen and tween set, Meyer has a decent amount of genre cred to his name already, having had roles in the Canadian dinosaur series, Dinosapien, as well as R.L. Stine’s The Haunting Hour. In his role on Mr. Young, he plays child prodigy Adam Young, who graduated from college at age 14 and becomes a high school science teacher. And now, while he won’t get a whole lot of screen time, he will have a small part in what could be another young adult sci-fi franchise.

But, like I said, he won’t be around for very long. Stilson, the resident bully in Ender’s Game, attacks Ender (who will be played by Asa Butterfield) at Ground School in the first chapter of the novel. Ender fights back, severely injuring Stilson, and later finds out (years later) that Stilson died.

Ender’s Game is being directed and written by Gavin Hood (X-Men Origins: Wolverine) and is set for release on March 15, 2013. It is being produced by OddLot Entertainment (Drive), Summit Entertainment (Twilight), and Digital Domain. Along with Butterfield, Meyer joins Sir Ben Kingsley (Mazer), Hailee Steinfeld (Petra), and possibly Harrison Ford as Col. Graff.