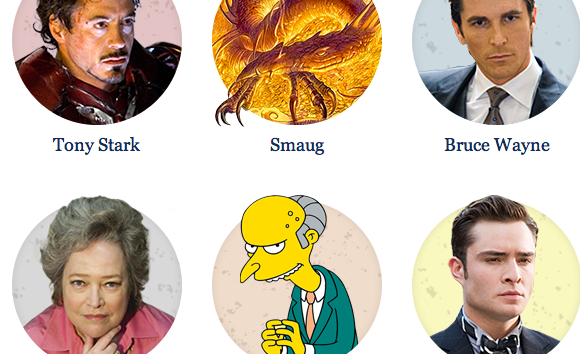 Just like The Mary Sue, Forbes loves its lists, and I’ve loved the Forbes Fifteen ever since I found out about it, regardless of the rest of the magazine’s content. I mean… I guess it’s about money, right? And anyway how could I not? The first Forbes Fictional 15 I saw confirmed my own inter-DC rivalry: Bruce Wayne was richer than Lex Luthor.

Rounding out this year’s list is Scrooge McDuck, Carlisle Cullen (as in Edward Cullen’s father), Artemis Fowl II, Tony Stark, Bruce Wayne, Mr. Burns and newcomer Smaug, soon to make his film debut. Forbes, as the people who would know, do their best to realistically estimate the net worth of each fictional character, and chose only those that are the richest and are known primarily for being rich. Their article on the process they went through to put a monetary value on the Smaug’s hoard (not to mention the Arkenstone) is quite the interesting read, and involves citations from the D20 System Reference Document. Good geek detective work, gentlemen!

Of the slightly more than one thousand billionaires in the world, there are little more than a dozen female ones, and Forbes has always made sure to include at least one woman on the Fictional 15, but it seems that fictional female billionaires are just as rare as real ones. Michael Noer admits that finding suitable and diverse female candidates for the list is something Forbes is committed to in an article specifically addressing the problem.

While there has always been at least one woman on each year’s list, all too often there has been only one — and her name has been Lara Croft… Our fictional reporters — the best in the business — have worked hard to rectify the gender imbalance, even breaking Fictional 15 rules against folkloric characters (the Tooth Fairy appeared on the 2010 list), but the gap persists.

There have been some perennial female candidates.  Miss Havisham, the rich spinster from Great Expectations, is brought up nearly every year and is usually dismissed on the grounds that she simply isn’t rich enough.  Is she really the Victorian equivalent of a billionaire?  And at every fictional story meeting, someone is sure to nominate one of the Disney Princesses, usually Snow White or Ariel.  The problem here is that you need to infer their wealth from the fact that they live in castles, are royalty and wear fancy dresses. It is a central tenant of the Fictional 15 that the characters need to be known for being rich in their narrative worlds — this is actually what makes the list work.  And being rich is not part of the Princesses’ characters in the same central way as it is for Thurston Howell III or C. Montgomery Burns.

We could simply direct them to a couple of useful TVTropes entries, but Forbes has already invited commenters on its article to propose characters for next years’ list.

We don’t suppose you’d be able to come up with any? Just off the top of my head, the first episode of Firefly features a lady who owns an entire moon. Let them know.