Science Has Figured Out The Mystery Of Flying Snakes, Oh Also Snakes Can Fly

How do you say, "Flying snakes will kill everything you love" in Parseltongue? 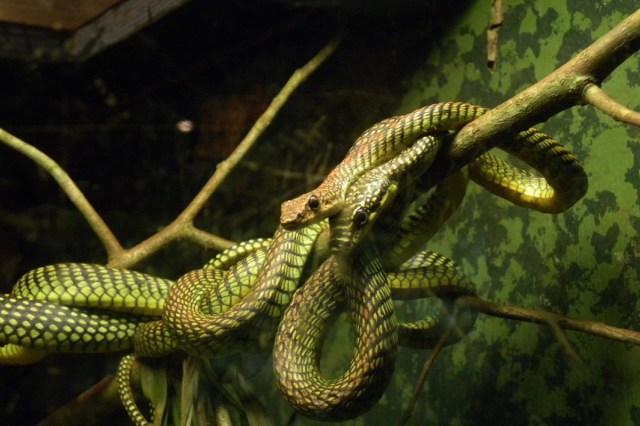 In case you were sleeping well at night, not at all afraid of giant serpents slingshotting through your bedroom window — surprise! There are a whole bunch of snakes that can fly, and we’ve had no idea how. Luckily, these snakes are mostly in Southest Asia, and scientists have just figured out their secret. It’s not Slytherin-related. Probably.

Since snakes aren’t the most bird-like of creatures (see: no wings, no legs, are snakes), it’s been a biological mystery as to how they manage to launch themselves through the air. A team of scientists from Virginia Tech have been studying these “flying” snakes (all from the genus Chrysopelea), who actually fling themselves gracefully and horrifyingly from tree to tree, in order to discover how they became creatures of nightmare.

Their paper, published in the Journal of Experimental Biology, says that snakes “massively transform” their bodies in the air to achieve flight; they flatten out behind the head, rotating their ribs forward and upwards. This expands the snake horizontally by twice its normal width, turning its body from round to concave. Then, the snake wriggles through the air head-first, basically air-swimming to its target destination.

According to the researchers, this information could be valuable when helping to develop robots that can crawl, climb, or glide, because apparently flying snakes weren’t terrifying enough already.