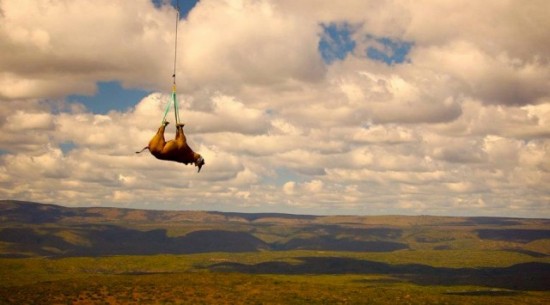 So, let’s say you’re the WWF. No, the other WWF; the one that deals with wildlife conservation. And let’s say that you’ve spent years preparing the expansion of wildlife habitats with the highly endangered black rhino as the flagship for the project. But how do you get more rhinos to the space you’ve prepared? The answer, apparently, is to tranquilize the beasts, blindfold them, and dangle them from a helicopter while flying them to their new homes. Any similarity to the film Operation Dumbo Drop is purely coincidental.

The result is happier, healthier rhino populations, and also some astounding, improbable imagery. Read on after the break for an incredible video of the process.