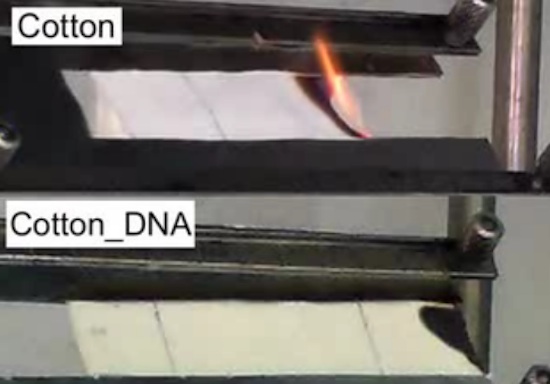 Looking for a way to make sure your clothes don’t burst into flame? A team of researchers at the Polytechnic University of Turin has come up with a method I’m willing to wager you’ve never tried before — rubbing herring sperm into the fabric. Because seriously, who would have thought of trying that? I can’t even take a guess at where you’d find that much herring sperm. You can’t argue with results, though, and whatever else you can say about it, herring sperm seems to make a pretty reliable flame retardant, even if it’s not a perfect process yet.

The results of the study were published in the Journal of Materials Chemistry A, and show that the structure of DNA — a sugar and phosphate backbone that also contains nitrogen — make it a reliable, if conceptually gross, flame retardant. To test the principle, researchers extracted pure DNA from herring sperm, then dissolved the DNA into a water base and applied the liquid to a piece of cotton. After the cotton was allowed to dry, it was tested against an untreated piece of cotton, which burned much more quickly and heartily than the DNA coated fabric. Researchers say that’s because when substances like phosphorous and nitrogen that are found in DNA are exposed to heat, they set off processes that result in the formation of carbon, which doesn’t burn well.

While the treatments are promising, don’t expect to see DNA treated clothing on the market anytime soon, as the treatment still has some obstacles to overcome. Not only is it at least three times as pricey to produce as current flame retardants, the coating is also destroyed by a run through the washing machine. That means you would have to apply a new coating of sperm solution to your clothing every time it came out of the laundry, a counter-intuitive proposal if I’ve ever heard one.