NASA stares into the Sun so you don't have to. 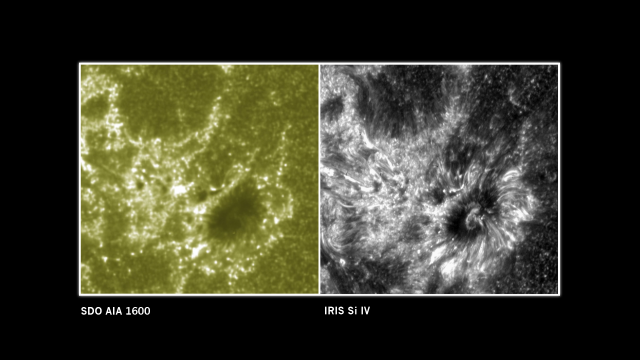 NASA’s Interface Region Imaging Spectrograph (IRIS) satellite has been open for less than two weeks, and already it’s returned the first images from its mission to study the Sun’s atmosphere. The combined ultraviolet telescope and spectrograph is pulling in amazing views as well as valuable data on energy transfer in the Sun’s interface region.

The IRIS, which launched on June 27th and opened its telescope doors on July 17th, has already produced unique insights into the largely-unstudied interface region in the Sun’s lower atmosphere, where the activity of massive magnetic fields facilitates heat transfer outward to the corona and intensifies its temperature to 1 million degrees Kelvin, or 1.8 million degrees Fahrenheit. One of the biggest mysteries of the Sun is how the outermost part is hotter than the interior, which seems counter-intuitive, and the interface holds the answer to this question. According to NASA’s Karen C. Fox, “IRIS’s first images showed a multitude of thin, fibril-like structures that have never been seen before, revealing enormous contrasts in density and temperature occur throughout this region even between neighboring loops that are only a few hundred miles apart.”

The above image (take a closer look here) shows the IRIS image on the right, as compared to one from NASA’s Solar Dynamics Observatory (SDO), which is noticeably less detailed. A brief video (keep in mind it’s sped up) lets you see for yourself what it looks like when streams of hot and cold plasma collide in the interface region — to me it looks like an ’80s movie’s depiction of Hell.

IRIS will continue gathering data, taking advantage of computer modeling technology to process incredibly complex high-resolution images and spectrographic data. Understanding this better could show us how to predict the Sun’s chaotic ‘weather’ — vital if we want early warning when a solar flare or coronal mass ejection is coming straight at us.