The ill-understood area of the Sun could be responsible for keeping it -- and by extension, us -- hot. 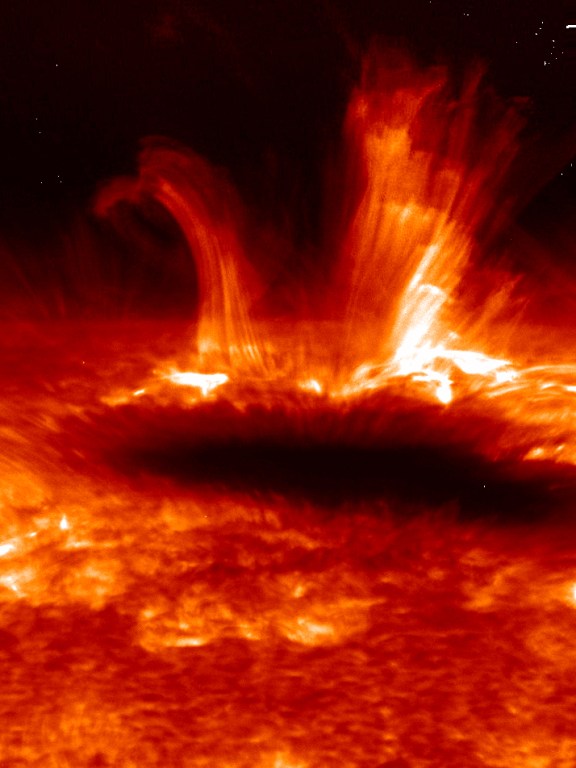 Later this month, NASA is set to launch their spanking new solar study satellite, the Interface Region Imaging Spectrograph (IRIS), a tool meant to capture data about the interface region, an area that lies just above the surface of the sun that plays a key role in intensifying the incredible temperatures of the corona, the Sun’s outer atmosphere. Just how it accomplishes that, though, is unclear — that’s why we’re sending a satellite, guys!

The interface region is only 3,000 to 6,000 miles thick, which is a pretty slim profile for cosmic features and downright miniscule in comparison to the corona, but scientists believe it is responsible for the complex processes of energy transfer that heat the Sun’s atmosphere to a toasty 1.8 million degrees Fahrenheit. That’s a thousand times hotter than the sun’s surface. In addition to warming the corona, the interface also drives the solar wind, expelling particles out of the sun and through the solar system, and is the source of most of the sun’s ultraviolet radiation.

“Understanding the interface region better improves our understanding of the whole corona,” said Joe Davila, an IRIS project scientist at NASA’s Goddard Space Flight Center in Greenbelt, Md. “And, in turn, how it affects the solar system.”

While the region has been difficult to study in the past, NASA hopes to gain new insights into it by tracing the path of energy and plasma from the chromosphere and solar transition regions to the corona. New information could make it possible to predict and prepare for hazardous solar phenomena like solar flares and coronal mass ejections, which can cause damage to satellites and disrupt power grids and GPS service.

IRIS weighs 400 pounds and stretches 12 feet across with solar panels extended — you did expect it to be solar-powered, right? — will go into orbit around the Earth later this month, but it’s eyes will be trained on the Sun at all times, collecting spectrographic data from many wavelengths of light at once. The data will allow NASA supercomputers to create high-resolution 3-D models of the interface region and in time, build their own sun. Okay, probably not that last bit, but a guy can dream, right?

Officials hope that IRIS will be able to pick out smaller features of the sun’s atmosphere than previous instruments, including some spectacular sights. “Imagine giant jets, like the huge fountains you see in Las Vegas,” explained Alan Title, a physicist for Lockheed Martin who is working on IRIS. “Except these jets have a footprint the size of Los Angeles, and are long enough and fast enough that they would zoom around Earth in 20 seconds.”