Watch Michael Fassbender in the First Trailer for Assassin’s Creed

The film is set in the world of Assassin’s Creed, but not based on any particular game. It also brings together Fassbender and Marion Cotillard again after their partnership on Macbeth in a really interesting post-Shakespeare partnership. Cotillard will be repping Abstergo Industries’ Animus project as Sophia Rikkin, daughter to Alan Rikkin. The film will also obviously feature the Templar organization.

From the look of this trailer, fans of the Assassin’s Creed franchise may be really pleased with this film. My only experience with Assassin’s Creed is watching other people play the games, so I kind of already feel like I’ve seen an Assassin’s Creed movie, but I think they’ve done a really good job replicating the look and the experience of the games in live action. And Fassbender’s amazing jawline. Oh, that jawline. Looks damn good coming out from under a hood.

Check out the awesome poster that was also released: 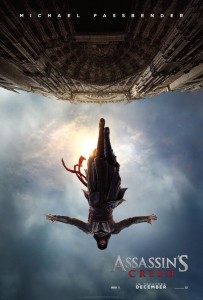 Are you psyched for this? If so, you’ve got a bit of time to wait. Assassin’s Creed drops on December 21st.

(via Polygon, image via screencap)