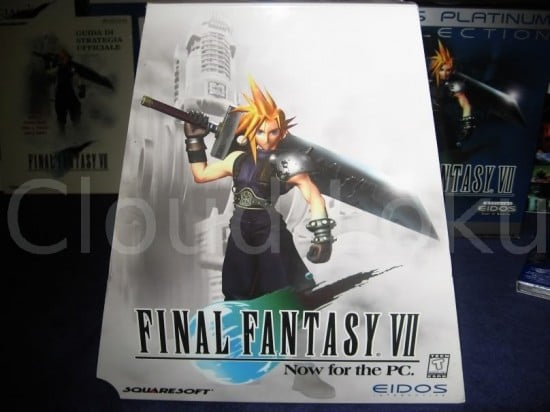 If you don’t already own it, or have only watched your friends play it because you opted to get a Nintendo 64 so you could play Zelda, and also didn’t snatch up the digital versions available on the PS3 and PSP, the beloved Final Fantasy VII is headed for a PC re-release sometime soon. Square Enix hasn’t given an exact date, but they have divulged where you can snag the re-release, and what extra features it’ll boast.

No, it’s not coming to Steam. Sorry. Square has announced that the re-release will be made exclusively available on its own Square Enix Store. However, that unfortunate news comes with the news that the re-release will have some new features not found in any version of FFVII. The re-release will feature 36 achievements, a character booster that seems to be some sort of stat editor to allow for easier play, and the hilariously titled cloud saves, which act as standard saves on the cloud, but you know, cloud, huh huh.

If you already own the old Final Fantasy VII PC release from way back in 1998, this’ll at least be somewhat thrust into modern times, as it’ll be available in digital download and have cloud saves. The graphics probably won’t be updated too much, if at all, but the game should run much better on modern day computers,which anyone who had the original PC release will be happy about after suffering through the poor performance.

With this PC re-release, it seems Square will do just about anything with the FFVII universe other than make a direct sequel RPG, or remake the entire game from the ground up with modern technology. Even though one part of the FFVII extended universe was actually very good, it’s still kind of a shame to see we now have a prequel, a side story, a direct-to-DVD direct sequel CGI movie, and this re-release, rather than the thing fans have been clamoring for. Oh well, something is better than nothing, right? And hey, Final Fantasy IX is better anyway. Yeah, I said it, but so did everyone else (scroll down a bit).