Feminism Around the World: BRB, We’re off to Claim Our Days off for Our Periods in Italy 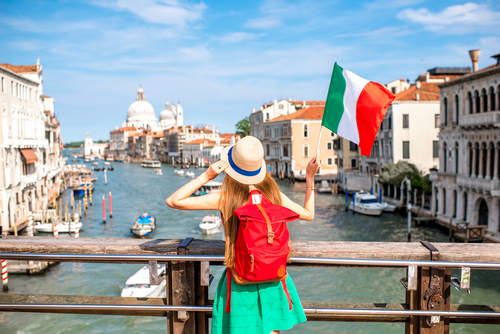 Early last month, four female legislators in Italy proposed a law that would, as reported by Jezebel, “give women who want to stay home [from work] during their periods the opportunity to do so.” The proposed law, which is currently in the lower house of the legislature, would give women an optional three days paid leave a month if they have painful, or particularly heavy periods.

As those of us with periods know, we don’t get to choose how our periods will affect us, and if they’re so bad that we’re doubled over in pain, or needing to tend to our period supplies every hour, it would be a welcome thing for our employers to understand that half the population goes through this, on a monthly basis, and it would boost employee morale if periods were taken into account within workplace culture.

Of course, there’s always the opposite. Opponents of the proposed law fear that it will simply make things worse for women in Italy, a country in which only 61% of women work (compared to the 72% European average), because it would reinforce the idea that periods make women weaker, or less competent workers, and would discourage employers from hiring women.

“Women are already taking days off because of menstrual pains, but the new law would allow them to do so without using sick leaves or other permits. However, on the other hand I wouldn’t exclude that [if the law is approved] this would lead to negative repercussions: The demand for female employees among companies might decrease, or women could be further penalised both in terms of salary and career advancement.”

Here’s the thing, Italy already has many other female-friendly labor laws, including “excellent maternity leave options,” and none of them stop employers from creating a sexist work environment in practice, legality be damned! Fortune reports:

“For instance, women are entitled to five months of paid maternity leave, but the national bureau of statistics reports that almost one in four pregnant workers is fired during or right after giving birth, even though the practice is illegal. Some employers go as far as to ask for signed, undated letters of resignation so they can terminate women without penalty if they become pregnant.”

My two cents? You don’t pass laws that protect women based on what assholes might do. You pass a law because enough people deem it necessary. It’s then up to law enforcement and the government to prioritize upholding those laws. Getting women into the workplace is a huge problem in Italy. That doesn’t mean you leave the ones in the workplace without the protections and services they need.

In this case, using already-existing sick days or personal days doesn’t make sense. I don’t believe it should only be on individual women to worry about a situation that affects most women, wasting the days set aside for actually personal or individual situations on a biological function most women have.

What do you think? Should Italy pass this law? Would you like to see something similar enacted in the United States? Tell me in the comments below!

INDIA: “India Is Gearing Up to Launch a Safe, Effective, Cheap Male Contraceptive With Little Support From Drugmakers” (Jezebel, 4/2/17)

UNITED KINGDOM: “A tampon tax is bad enough. Using it to fund anti-abortionists is a disgrace” (The Guardian, 4/3/17)

And this horror show…