The Mary Sue’s Favorite Comments of the Week: The Wickedly Talented John Revoltya

We all had to live with the aftermath of the Oscars this week, and that means John Travolta finally got a taste of his own name-mangling medicine courtesy of SomeGuy of The Mary Sue comments section. World, meet “John Revoltya.”

But the world isn’t entirely revolting—there are also gems of pure, distilled adorable like this baby bat eating a banana. A batnana, if you will. It makes you want to burst out in song, as evidenced by tredlow’s impromptu musical number:

Which reminded us all of this other musical number… But not everyone thought bats need to be young and cute to get everyone’s attention. Some people like grownup Bats just fine. 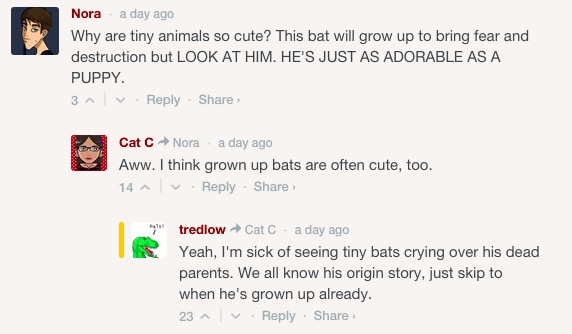 But other DC heroes need time to shine, too, and we were excited to learn of the CW’s planned Arrow/Flash spinoff drama headlined by Brandon Routh, Victor Garber, Wentworth Miller, and Caity Lotz. We weren’t the only ones interested in the idea, as rebelsfangirl so perfectly put our feelings into words, “I think this idea has Lotz of potential.”

Oh, and we also learned of a new species of dinosaur that was discovered when scientists realized that a “fake” fossil wasn’t fake at all but was just as real as those other fossils—despite its superficial differences. And they named it after a female scientist! 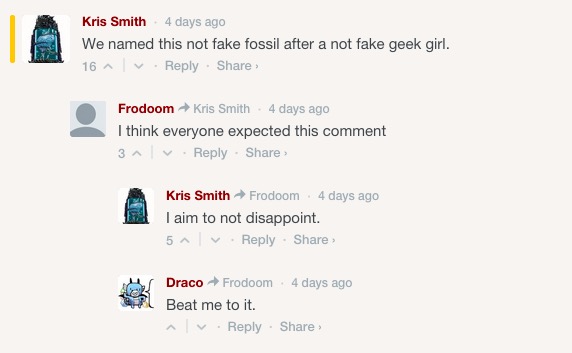 And, of course, there was the dress. THE dress. Our own Victoria McNally wrote a dystopian YA novel (well, part of one) about what the AD (After Dress) times will probably be like, but infinitysharkv0 dropped by to let us all know that we weren’t the only ones with a dress-based literary masterpiece: “OH DEAR CTHULHU LOOK AT THE AMAZON REVIEWS FOR THIS DRESS http://www.amazon.co.uk/Roman-Womens-Detail-Bodycon-Dress/dp/B00SJEUCWU”

When you’re done reading that (and inevitably engaging in yet another argument about the dress), join in with the speculation on the identity of the new Thor. Truly, in her  jaw-breaking defense of feminism, we are all new!Thor. 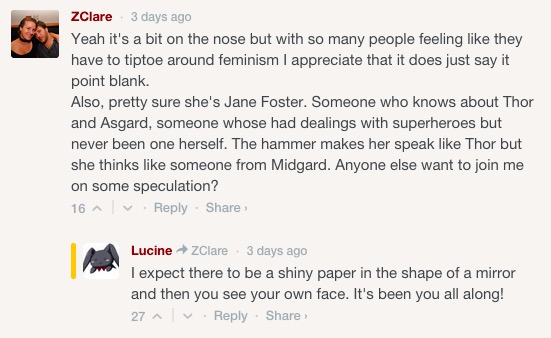