Canary, Firestorm, The Atom, and Captain Cold Series in the Works at The CW as Arrow/TheFlash Spinoff 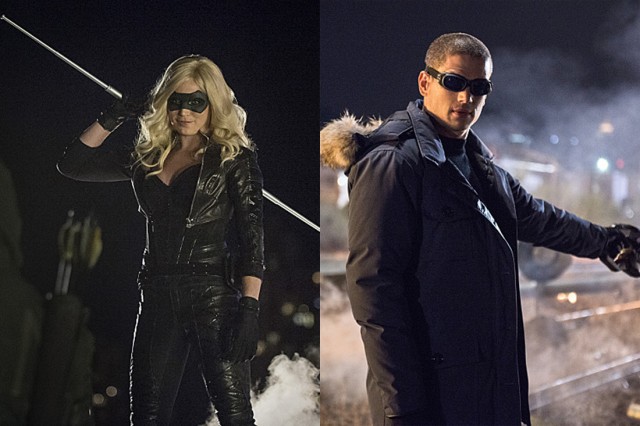 I don’t even know where to begin so I’ll just give you the fresh-off-the-presses news via Deadline:

DC Comics superheroes are uniting in a potential new drama series at the CW, a spinoff from hits Arrow and The Flash that will feature several fan-favorite recurring actors/characters from both shows. I have learned that the network has teamed with Arrow creators Greg Berlanti, Andrew Kreisberg and Marc Guggenheim for a project eyed for next season toplined by Brandon Routh, Victor Garber, Wentworth Miller and Caity Lotz.

The untitled project, now in development, is described as a superhero team-up show. Routh, Miller and Garber will reprise their popular DC Comics characters — Arrow‘s Ray Palmer/The Atom (Routh), Flash villain Leonard Snart/Captain Cold (Miller), and Flash‘s Dr. Martin Stein (Garber). Because her Arrow character Sara Lance was killed off, with her sister Laurel Lance (Katie Cassidy) taking over as the Black Canary, it is unclear whether Lotz will play the same or new superhero.

So they could just know the greatness of Lotz and be casting her as another DC hero but I am crossing my fingers big time here for a Lazarus situation.

“I have learned the new project will include three major DC Comics characters who have never appeared in a TV series,” Deadline adds. ” With the creative auspices and talent involved, I hear that it could go straight to series, possibly for next midseason.”

What do you think, folks?