Museum Discovers New Species From Fossil They Thought Was Fake

And bonus, hey named it after a female scientist! 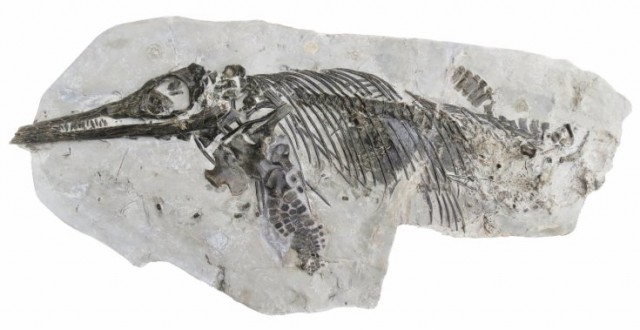 You hear stories all the time about people who come across fossils, artworks, and other historical artifacts that they think are replicas until someone figures out that they’re actually real—but you don’t expect that kind of thing to happen in a museum, of all places. Like, shouldn’t you guys know the difference?

For thirty years this particular fossil was tucked away in the Doncaster Museum’s collection after being found on the Dorset Jurassic Coast in 1980. Finally in 2008 it was uncovered by University of Manchester paleontologist Dean Lomax, who was given the “copy” by the museum’s education director to use in a display he was working on. Upon closer examination, he discovered that not only was the artifact not a plaster cast but a real, fantastically preserved (you can even see the contents of the creature’s stomach) 189-million-year-old ichthyosaur fossil, and one that had never before been studied before.

Since then, Lomax and his colleague Professor Judy Massare have been hard at work comparing the fossil to at least 1,000 other specimens to make sure that the unusual limb bones this icthyosaur has are unique, and recently published their findings in The Journal of Vertebrate Paleontology—spoiler alert, it is unique.

“Mary [Anning]worked tirelessly to bring the ichthyosaurs, among other fossils, to the attention of the scientific world. Mary and her brother, Joseph, discovered the first ichthyosaur specimen to be scientifically recognised, collected at Lyme Regis around 1811.

“It is an honour to name a new species, but to name it after somebody who is intertwined with such an important role in helping to sculpt the science of palaeontology, especially in Britain, is something that I’m very proud of. In fact, one of the specimens in our study was even found by Mary herself!”

Surprisingly, this kind of thing happens more than you think—which is why it’s so important that museums maintain their own collections. “Sometimes we discover things in the field,” Dr. Blanca Huertas from the Natural History Museum in London told the BBC. “but the collections are an incredible source of opportunities, since visiting them, people can study specimens and collections from hundreds of places across the entire planet and travel in time.”