This is the Farthest-Ever View of the Universe 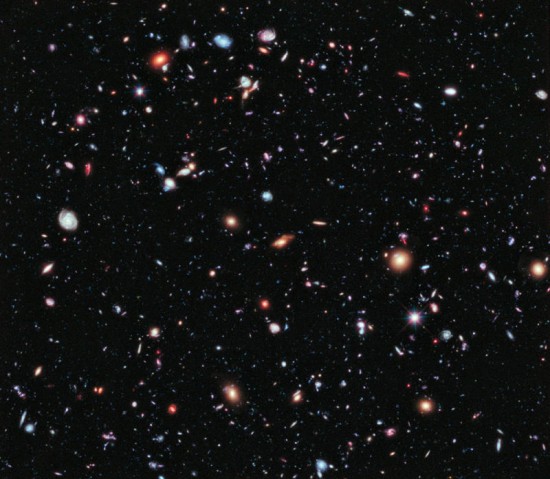 Though we haven’t been very far out into the black, that doesn’t stop science from letting us know what it looks like out there. Thanks to a team of diligent astronomers, we can now gaze upon the farthest-ever view of the universe.

The above view isn’t just a single photograph, but a collage of sorts, patched together from individual photographs taken over the course of ten years by the Hubble Space Telescope. The Hubble was pointed at the same patch of universe for a decade, and eventually, the astronomers managed to put it all together into one stunning view.

The telescope wasn’t able to simply point and shoot like a regular camera, but it had to be exposed to the patch of universe for a long time, until faint light from galaxies finally showed through. The photograph, dubbed the eXtreme Deep Field, or XDF, contains around 5,500 galaxies. If you’re wondering why you can’t see 5,500 colorful dots in the picture, it’s because the fainter galaxies are one ten-billionth of what the human eye can detect.

Interestingly, the youngest galaxy seen in the XDF was created 450 million years after the Big Bang.

If the above picture can’t stop blowing your mind to little bits, three important astronomers involved with the XDF will be hosting a webinar this Thursday, September 27, at 1 PM. If you have any questions for them, send them in, and attend the webinar to learn more about the XDF.