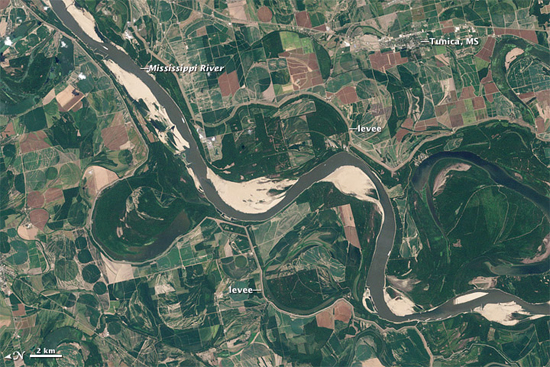 The Mississippi River is a pretty good indicator when it comes to droughts. Given the size of the river, flooding and droughts both have profound effects on things like the barge industry and, generally speaking, anything that floats up or down the river. Last year, it was flooded to more than 56 feet above river stage. This year, there has been a complete reversal. The drought is so severe, in fact, that it can be seen from space.

At the end of July, more than 60% of the lower states were experiencing drought, according to The Atlantic. This has caused the Mississippi River to run precariously low as of late. There’s even a stretch of the river 11 miles long that has been closed since August 11th. Near Memphis, Tennessee, the water levels actually range to almost 20 feet below where they were this time last year.

This is an image of a stretch of the Mississippi River taken last year on August 14th by NASA‘s Landsat 5: 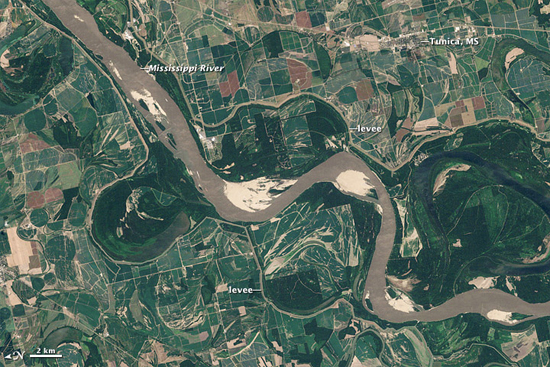 This is that same stretch, taken August 8th of this year, from Landsat 7:

NASA also notes that this flow shortage essentially translates to higher shipping costs; the loss of a single inch of draft means that a barge working the river has to carry 17 tons less than it typically would in a normal environment. The shipping industry might be taking direct losses, but all the ports along the way will be hit with indirect losses as well. Overall, it’s not looking like a good year for folks that make a living off the river.

(NASA via The Atlantic)