Farm 432 Looks to Bring Fly Breeding to Your Kitchen Counter

On purpose. Not in a "put bananas on the counter and then left for the Memorial Day weekend" way. 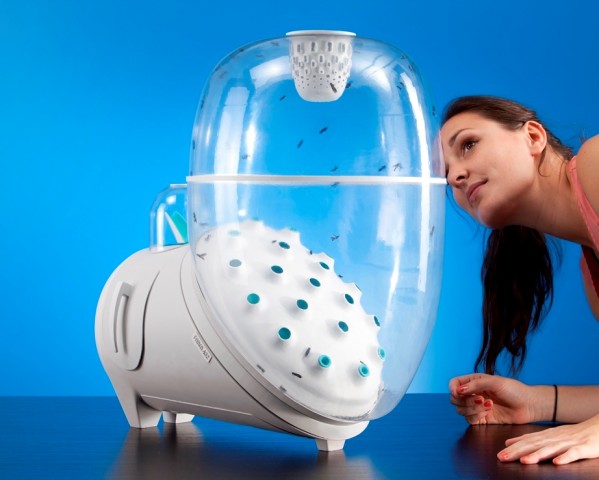 Designer and Fulbright scholar Katharina Unger is one of many folks who believe that to feed the world in a more populous future, humans are going to have to eat more bugs than they do right now. That’s why she’s designed Farm 432: a prototype that could bring fly farming right into your kitchen.

Believe it or not, Unger has a pretty sound rationale behind designing a box that lets flies have sex on your kitchen countertop. Researchers have in past months been calling attention to the need to introduce bugs to the food supply as increasing populations further stress the planet’s ability to feed everyone — and especially to feed everyone protein. Not only are flies great sources of protein and other nutrients and cheap to produce, you can guarantee that larva you farm yourself are organic and locally sourced, a fact that will surely impress everyone you know when you invite them to come over and eat bugs for dinner. We’ve been seeing some interesting ways to make bugs seem more meal-worthy from a number of sources, but Unger’s DIY fly factory is really something you have to see.

The farm is a pretty simple process, and in just 432 hours — or 18 days — Unger says it can produce 2.4 kilograms of edible, nutritious larva from just a gram of eggs, some food scraps, and a negligible amount of water. Black soldier fly pupae are placed in the “birthday box” at the top of a plastic chamber. Inside, the flies live, breed, and die, leaving behind a clutch of eggs on in an egg tube based on the best principles of fly egg-laying design. The eggs hatch, turning into larva that grow in a separate chamber, living off a few scraps of leftover food. Once they get a little older, they prepare to pupate by looking for a dry, safe place, the search for which leads them up a ramp to a promising place to grow.

That ramp, though, is a trap, ending in a cliff that drops larva into the “self-harvesting” box. It’s called that because fly larva are so dumb that they will pretty much process themselves into food for you. Farmers can pick a few larva out of the harvest and put them back in the birthday box to continue the cycle and ensure another crop of larva in short order, while the rest of the contents are now food. You know, in theory.

If you’re still not sold, you can see some of the early prototypes for Farm 432 in action on Unger’s site, along with video of her preparing the insects for a dinner of sauteed grubs and crickets, which actually looks…not so bad? I mean, pretty much anything tastes good if you fry it in oil and salt it — why should baby bugs be any different?

As far as food solutions for the nightmarish nuclear wasteland some of us will one day inhabit, this is a pretty solid one. But I hope I’ll be forgiven if I keep stockpiling rations of canned bacon and Capri Sun.