Scientists Propose Mealworms As Protein Source of the Future, Soylent Green Suddenly Not Sounding So Bad 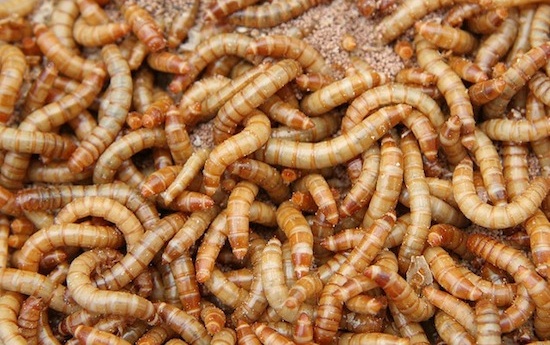 Be it a slice or ten of bacon in the morning or a good steak for dinner, most meat shares a common bond — it is pretty awesome to eat. While this is clearly the best thing about meat, it is also one of the biggest knocks against it. Since meat is awesome, everyone wants to eat it. Taken alongside the fact that meat takes a significant amount of time, energy, and resources to get as awesome as it is, that means that while meat is  awesome, it is actually a pretty inefficient and unsustainable way to feed a lot of people. A pair of researchers at Wageningen University in the Netherlands has proposed a new way to get cheap, nutritious, lean protein into the diets of people worldwide — by turning mealworms into the mainstream meat of tomorrow.

While meat is already consumed at high levels around the industrialized world, consumption rates are rising sharply in developing countries where populations are expected to expand the most. Thus, as populations continue to rise in the coming decades, meat is going to become a more and more precious commodity. As more people look to add more meat to their diets — because of how awesome it is — Dennis G. A. B. Oonincx and Imke J. M. de Boer propose that resource intensive grub like beef and pork could be replaced by actual grubs, which actually have a great many virtues as a food stuff. They’re nutritionally packed, cheap and easy to produce, and don’t require a great outpouring of energy to offer the main pragmatic benefit of meat — a mostly straight up dose of lean protein. In fact, as a foodstuff, mealworms have just one thing going against them. This is, of course, the fact that they are, in point of fact, mealworms, and thus not food.

In the study, published online in the journal PLOS ONE, Oocinx and Boer modelled the energy consumption and and carbon emissions associated with raising one kilogram of mealworms, which make a nutritious, protein packed lunch, if you can stomach eating worms. The levels of input required to get a kilo of mealworms for food compared very favorably to higher rates for chicken, beef, pork, and milk, making it a much more efficient, sustainable protein source of the future —  a future in which we will all eat worm burgers that are seasoned with our own tears, and where the living will envy the dead.

Now, I suspect some of you have eaten mealworms before, and will not hesitate to point out that they are, in point of fact, a food or food like substance. To which I respond thusly:

While I have mostly nothing but an abiding respect for the many dietary choices of others, I just can’t get behind this one. I have eaten paint chips before. That doesn’t make them food, any more than having eaten worms before makes them food. In a best-case scenario, worms are bait — also known as food for food. Perhaps more pertinently, though, remember that finding a worm inside of food is a nearly universal indicator that the thing you are attempting to consume is no longer food. At that point, it is either rotten or mezcal, and putting either substance in your body is a risky proposition nearly certain to end in stomach upset and regret. Tread lightly and eat well, friends.