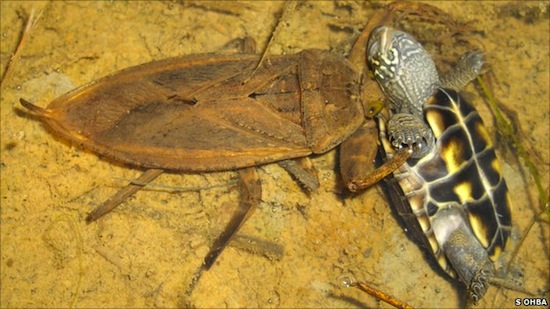 Just in case your day was lacking in nightmare sauce: Japanese researcher Shin-ya Ohba captured this photograph of a giant water bug eating a baby turtle. Giant water bugs of subfamily Lethocerinae were already known to be capable of eating fish and small frogs, but this, according to Ohba, is the first report “concerning predation on a turtle by Lethocerinae.”

Writing in the journal Entomological Science, Dr Ohba describes observing a Kirkaldyia deyrolli eating a Reeve’s pond turtle in a ditch next to a rice field.

Using its front legs the giant water bug gripped the turtle, inserting its syringe-like rostrum into the prey’s neck in order to feed.

The giant water bugs are known to only attack moving prey, so it is likely that the 58mm insect captured and killed the young turtle before feeding on it.