Set phasers to "fuck you." 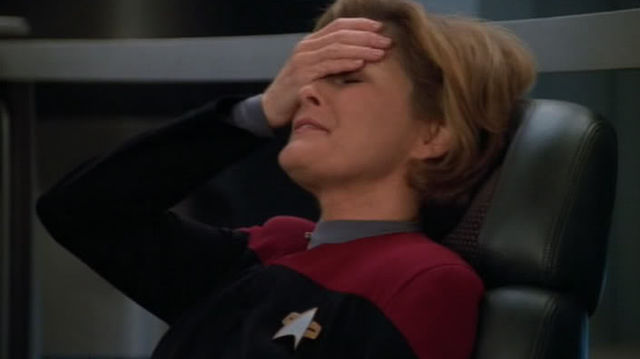 Normally we don’t pay much attention to the National Review here at The Mary Sue—after all, you don’t often see them reporting on the same kinds of stories that we tend to cover in the pop culture and science sphere. But, as it turns out, one columnist who writes for them has very specific opinions about those topics, in an article entitled… “Smarter Than Thou: Neil deGrasse Tyson and America’s Nerd Problem.” Hoo boy. I have a bad feeling about this.

Columnist Charles C.W. Cooke’s argument, more or less, is that liberally-minded political figures—particularly those in the media—have aligned itself with rationalism and scientific exploration as a way to feel intellectually superior to their conservative counterparts (I’d counter that conservatives have been doing the exact same thing aligning themselves with “tradition” and “family values” for a while now, but let’s keep personal politics out of it for just a second). In particular, he cites Neil deGrasse Tyson as the poster boy for those who “presume themselves to be smarter than everybody else in the world.” On its face, it’s not an inaccurate notion. This kind of smugness is one the curses being a nerd brings sometimes—hell, it’s a curse of being human, really. We all have to check in ourselves every once in a while to make sure we’re not being jerks at the expense of other people who don’t know what we know about a particular subject.

But of course, he does not stop there. It’s not enough that self-identifying liberal nerds are acting like they know better than everybody else and are also ruining America with their terrible collectivist ways, or whatever. Apparently they’re also totally faking it to get people to think they’re cool.

Wait, why does that sound familiar? Oh yeah, because it’s literally a Fake Geek Girl Argument.

THERE IS A NATIONAL REVIEW COVER STORY ON FAKE GEEK GIRLS THIS IS NOT A DRILL THIS IS NOT @DRIL pic.twitter.com/7D0avh2so8

If it’s hard to make out the text, it reads thusly:

The pose is, of course, little more than a ruse — our professional “nerds” being, like Mrs. Doubtfire, stereotypical facsimiles of the real thing. They have the patois but not the passion; the clothes but not the style; the posture but not the imprimatur. Theirs is the nerd-dom of Star Wars, not Star Trek; of Mario Kart and not World of Warcraft; of the latest X-Men movie rather than the comics themselves. A sketch from the TV show Portlandia, mocked up as a public-service announcement, makes this point brutally. After a gorgeous young woman explains at a bar that she doesn’t think her job as a model is “her thing” and instead identifies as “a nerd” who is “into video games and comic books and stuff,” a dorky-looking man gets up and confesses that he is, in fact, a “real” nerd — someone who wears glasses “to see,” who is “shy,” and who “isn’t wearing a nerd costume for Halloween” but is dressed how he lives. “I get sick with fear talking to people,” he says. “It sucks.”

Yes, of course, everyone knows that people who like the multi-million dollar franchise Star Wars more than multi-million dollar franchise Star Trek are automatically categorized as second tier-humans, and that a single Portlandia sketch is the standard for how we must all be measured in geek society (sorry, gorgeous young women! Guess you’re not allowed!). Silly me, I always thought that someone’s passion for a particular subject wasn’t negated by how they spoke or what they looked like or even how much they might know, and that true nerdiness is in loving the little details of something—a scientific discipline or an artistic medium, or even just a single story— so deeply that you engage with it as much as you can in the way that feels best for you. But I guess I was wrong! Whoops! It’s about how many comics you’ve read!

But seriously, I cannot even wrap my brain around the level of bullshit elitism being spewed here—and in an article about how awful liberal elitism is, no less. By condemning people who do identify as nerds without subscribing to a very particular and arbitrary type of social criteria that’s rooted in what’s considered more difficult to obtain or master (I won’t ask whether he himself plays World of Warcraft, his go to example of the nerdiest video game despite its status as a global phenomenon, because that’s too much like what he’s implying with this article) Cooke is literally doing the same thing he is accusing Melissa Harris-Perry and Rachel Maddow of doing: acting like some people are better than others because of what they know. Those are his examples, by the way, not mine; surprise, the first two “fake geek” media personalities he lists after Tyson are a black woman and a gay women, respectively. Hands up, who saw that coming?

If you think you can stomach the rage, you can read the rest of Cooke’s misguided attempt at geek-gatekeeping here (it’s directed through donotlink so don’t worry: you won’t be contributing to the National Review‘s page views). And I wish I didn’t have to keep saying this, but can we all please, please stop trying to dictate who is and isn’t a nerd?