Creators Of WonderCon’s “I Hate Fangirls” Shirt Defend It, Double Down On “Fake Geek” Bullcrap 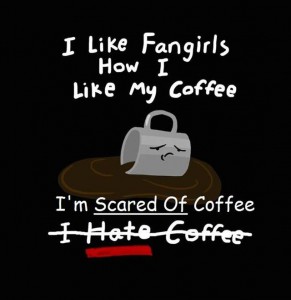 “So, we’ve apparently received some bad word on our fan girl shirt, with accusations of sexism being thrown at us from a certain few bloggers…

…who have completely ignored our other variant shirt on display or didn’t even bother to ask our take on it.

Apparently it’s only sexism if it is insulting to one gender. Woo double standards.

Anyways, the fangirl/fanboy shirts can best be explained like this: fangirls/boys =/= fans. Fans are people who like and genuinely respect a fandom, and it’s creators. Fangirls/boys are like those creepy fedora wearing neckbearded bronies, or hetalia fanfiction shippers, who make us all collectively cringe in pain at what they do to the things we love.

No one should ever defend these kinds of people. Seriously, they make the rest of us look bad.

oh and fyi: the ones who bought the shirt design, the fangirl one in particular, half were girls who bought it.” — Yesterday we brought you Greg Rucka‘s thoughts on a certain t-shirt for sale at WonderCon (a much more accurate version of which is above) that rightfully got a lot of people ticked off because of the way it perpetuates the toxic “there’s only one right way to be a fan of something” attitude that’s long infected geek culture and often manifests specifically in a way that’s intended to push girls out of geek spaces. Tankhead Custom Tees, which made the shirt, responded to the controversy with a grammatically-challenged message on their Facebook page, pointing out that they make a version of the shirt for fanboys too and completely ignoring the whole thing about how no one should be shamed for the way they choose to express their interest. Hetalia fanfic shippers, oh noes!

(via The Daily Dot, image via Joe L. on Facebook)