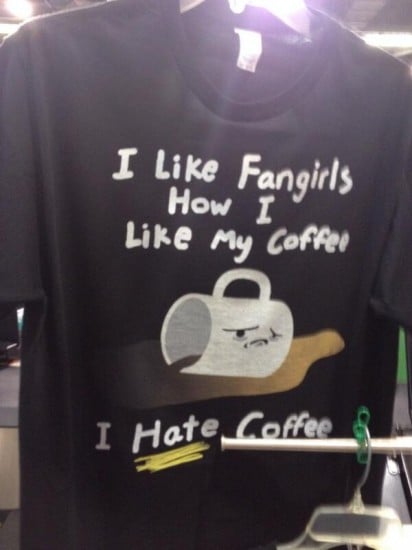 [Editor’s Note: With creator Greg Rucka’s permission, we’re republishing a piece he wrote on his personal blog in its entirety. Some strong language to follow from a husband and father who’s fed up. The topic of conversation? The above t-shirt design spotted at WonderCon this past weekend.]

I rarely use this to just blog. I’m going to just blog now, so you can all just ignore this if it’s not to your liking.

So, I saw that bullshit piece of shit “joke” t-shirt that managed to insult not only women, not only those of us who call coffee the Black Bean of Life, not only men (via the fact that it was created by an individual with a penis who thinks said piteous appendage allows him the right to tar the rest of us with the same brush), not only fandom, not only, dammit, people with an ounce of decency and who understand that a sense of humor is viable only when it enlightens, entertains, and instructs, rather than demeans and diminishes, and yes, I’ve been thinking about this pretty much all day, why do you ask?

My daughter, she’s a lot like her mother and me. Which makes sense, but where our son seems to have inherited his mother’s even keel and gentle soul, my daughter got the short straw, and drew my emotional volatility. She’s smart, maybe too smart, and she runs hot like I do, and she feels deeply, and passionately, and she sees more than maybe a lot of kids her age see. And she’s a geek (hell, she’s practically a hipster-geek, as she informed me she’d been reading Divergent before anyone even knew about the movie, let alone the book), she reads comics, she dresses up as Captain Marvel and Black Widow and she swings a lightsaber and uses her Nerf guns to shoot vampires just the way Buffy taught her.

So she doesn’t fit in. She’s in a school that’s a pretty good school, to be honest, but the ratio of boys to girls in her class has been 2:1 for the last five years. That takes a toll. And some of those boys? They’re not that far from Neanderthal in their thinking about gender (and what is going on at home with those boys I am forced to wonder…). And the girls in her class, they’ve pretty much made her odd-girl-out for five years now, because that’s the game they’re playing.

Portland Public Schools has a lottery system to get into its magnet programs. For two years, our daughter has been dreaming of attending one specific middle school, one that’s art focused. She’s been in a science-and-math magnet program, and she’s done very well there, mind, but the social aspect… it’s been grinding her down. She was looking to escape. She was looking to go to a place where, she imagined, she could be who she is and not suffer for it.

Such is the dream of all of us geeks and nerds and whatever we’re calling ourselves today. Such is the call of our fandoms, and why we answer.

So, yeah, lottery system. Random. Not merit based. Not application based. Just jump through a couple of hoops to apply, check a couple of boxes, and hope your number comes up.

Her number did not come up.

Needless to say, it did not really help. Because, ten years old, and oh do we forget how damn hard ten years old was for some of us, at least.

She’s trying so hard to find who she is, to find a place to be who she wants to become.

Fake geek girl? This is still a thing? Rape threats because a woman has the temerity to point out flaws in a grievously flawed cover? Bullshit arguments about inclusiveness being overdone, overrated, that we don’t need it?

So, yeah, this is directed at the guys, and you know who you are. Odds are you’re the ones who’d never read this in the first place, but that’s not going to stop me. You, yes, you. Come here. Listen.

What in the name of everlovingfuck is the matter with you? Are you simply stupid? Are you just ignorant? Are you broken? Newsflash: you are owed NOTHING. Not a thing. Not a goddamn thing. This fandom, that fandom, guess what? It doesn’t belong to you.

You don’t own it. You partake in it. It’s called community.

You want something to be your thing, make a club, build a tree-fort, and do us a favor. Don’t come down.

Next time you think of opening your damn mouth to talk about “the women” or “their agenda” or fake geek anything, if nothing else, know this: I am listening, and I am taking names, because you are, in part, talking about my daughter.

You are talking about my friends.

You are talking about my colleagues.

You are talking about those people I am fortunate enough to count as fans of my work.

And you do not get to talk about them that way.

Previously in Women in Geek Culture