So, The Back Cover Ad on Batman This Month Is a “Fake Geek Girl” Joke 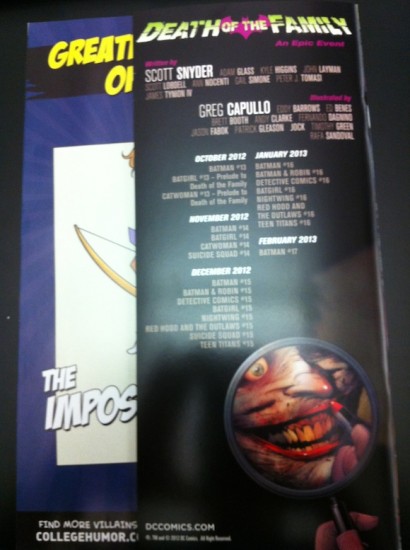 You might be forgiven for not noticing any ads in Scott Snyder’s Batman #13, since the story is riveting, horrifying, and kicks off the first major appearance of the Joker in the New 52. In fact, until David Willis of Shortpacked pointed it out on his tumblr, I didn’t even notice that the back cover ad on this issue was different from the back cover ad of the three other DC comics books I picked up this week. Which is unusual, since the way ads in comics usually work is that they are the same across all of a publisher’s titles in a given month, right down to page placement. So what’s the ad hiding behind that die cut cover of the Joker’s horrifying new face? 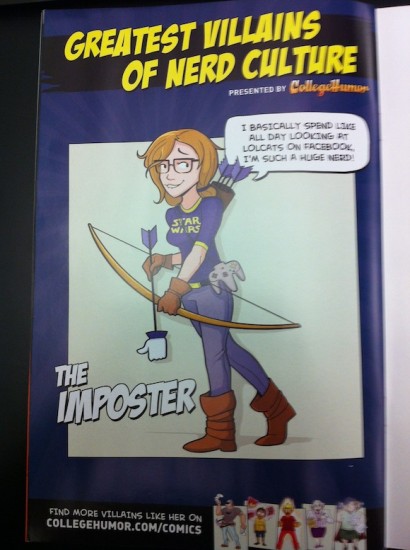 It’s a Fake Geek Girl joke, playing on the most pernicious, alienating, and sexist stereotype of women in nerd spaces. And if you can’t take my word for it, maybe you’ll take president of the Science Fiction and Fantasy Writers of America John Scalzi‘s, which was written more recently but at a pretty much identical cresting of the “Fake Geek Girl” idea in nerd culture as when I wrote my piece.

I’m not here to engage in a discussion about whether or not this attitude exists (it does), and whether or not it makes women feel alienated from nerd culture (it does). I just can’t decide which is more depressing to imagine: someone in marketing at College Humor (whose work I generally enjoy) pitching this specific example from their series of real life comic book “villains” to DC for an ad… or someone on DC’s marketing team saying “These ‘villains’ you came up with are all super funny, but you know… Some of our readers might feel targeted by the “guy who gets angry on forums” joke or the implications that they’re not good at personal interaction. And we probably shouldn’t use the one about executives… seeing as how we’re employed by them. So we’ll use the one that’s a girl. Girls don’t read comics anyway”

It’s also worth pointing out: I bought one other comic this week that also included this die-cut cover. It’s also being billed as one of the first installments of Death of the Family, DC’s latest big Batman event, the first major appearance of the Joker in the New 52. It was Batgirl #13. It didn’t have this ad.

If you’re looking for catharsis, David Willis, the cartoonist who brought this to my attention in the first place, has, as always, your catharsis right here.

86 responses to “So, The Back Cover Ad on Batman This Month Is a “Fake Geek Girl” Joke”