This Weaponized Quadrotor is Fake, But Cool Viral Marketing for Upcoming Call of Duty Game 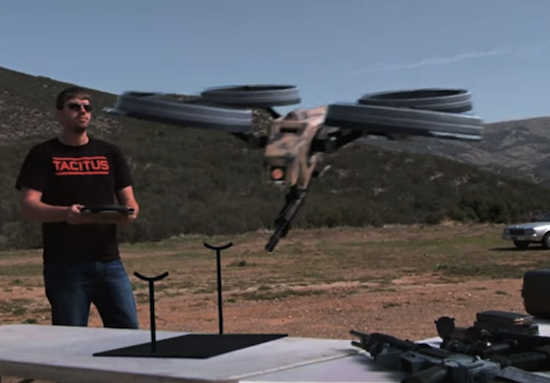 Activision has announced today that their next Call of Duty game — rumored to be Black Ops related — will be revealed on May 1st during the NBA playoffs on TNT so you know what that means: Let the viral marketing begin. The first piece, in what is sure to be an onslaught, is a special episode of the YouTube series FPS Russia featuring a military quadrotor with a machine gun. It may be fake, but that doesn’t make it any less fun to watch.
“I can tell from the pixels” arguments aside, there are a few things which should be setting off your BS sensors in this video. Mostly that it’s just too good to be true: 30 mph top speed; slim, sophisticated design; unidentifiable weapon; and shockingly good picture quality on the hand-held tablet. Not to mention that this robot would be way ahead of any comparable device available today, nor the ludicrous concept of loading an enormous explosive into a piece of expensive military hardware.

Also, I’m  not expert but I don’t think everything explodes when you shoot it.

But all that aside, this is still a fun to watch stuff get blown up. What’s more, it’s an interesting comparison between what the CoD makers think will be coming down the pipe and the current state of drone warfare. And if you’re a fan of the Call of Duty series then it will surely whet your appetite for the May 1st announcement.