Quadrotor Robots Work Together to Assemble Massive Sculpture from 1,500 Bricks 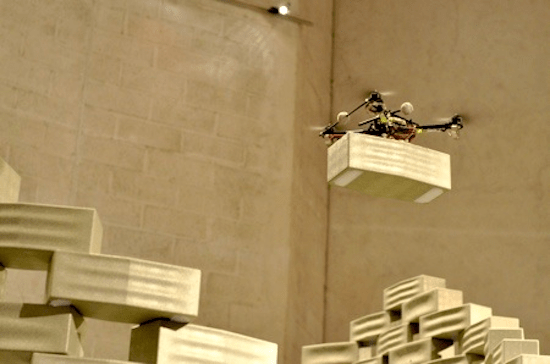 We’ve seen quadrotor robots do some pretty amazing things, but Raffaello D’Andrea has taken robotic art to new heights when he teamed up with architects Fabio Gramazio and Matthias Kohler to build a 20-foot tall tower from 1,500 foam bricks. The twist is that each brick was carefully placed by an autonomous flying drone, and is on display while under construction.

The sculpture is apparently being constructed by four robots working as a team. Two robots are flying at any given time, picking up prepared blocks from a nearby station, moving into position, and depositing them in the correct spot on the sculpture. Each block has glue affixed to the bottom and is carried using a special grappler attached to the underside of each quadrotor.

When the battery in one of the robots starts to get low, it will rest on a charging station high above the construction area and a fresh quadrotor will take its place.

All the while, the quadrotors are under autonomous control. Using a series of ceiling mounted cameras and a motion tracking system, the quadrotors are able to avoid knocking into each other as well as the sculpture. It also directs the robots where to place the bricks. The only assistance they receive from humans is having the blocks placed in a special receiving area.

Each brick would apparently serve as a series of apartment blocks connected to neighboring blocks, and hopefully would be assembled by giant autonomous quadrotors. Ah, but I suppose that will have to remain a dream for now.