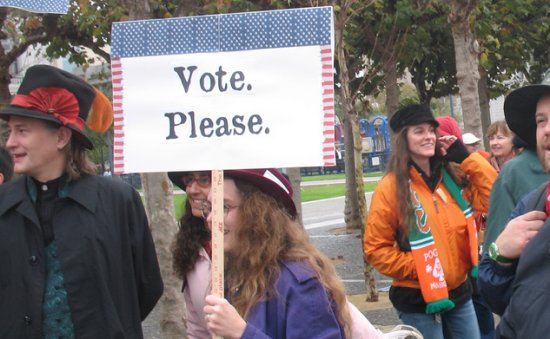 Did you know you could vote on Facebook? Not just about things like “Which cat is cuter?” or “What’s the best Full House episode?”, but on substantive things like the actual policies of Facebook? Well you can, at least for the next hour or so. Voting closes today at 3:00 (EST) on the newest round of privacy chances to Facebook. So how about you stop posting meaningless copyright notices on your wall and take a minute to do something that can actually affect what Facebook does with your information? This could be your last chance, since one of the changes is whether Facebook will let users vote in the future.

We’ve talked about the newest round of privacy changes before, but to recap, Facebook wants to be able to use all of your information to make focused ads outside of Facebook.

Voting has been open on the policy changes since December 3rd, but so far less than 700,000 users have voted. At the moment, those votes are overwhelmingly in favor of keeping the existing policies with 580,091 users voting to keep the old policies, and only 78,881 voting for the proposed changes. That huge margin won’t matter though, because for the vote to be binding, 30% of users need to vote. That 30% requirement is a joke, and not one we like.

Now’s a good time to remind you that, according to them, Facebook has 1 billion users. The only way Facebook is going to listen to users is if 300,000,000 of them, nearly the entire population of the United States, turn out to vote. The 658,972 users who have vote so far make up less than 0.07% of Facebook’s users.

For this vote to matter, 299,341,098 users need to sign on and vote, in the next hour. That’s more than double the number of Americans who voted in the presidential election this year — 131,463,122 according to Nate Silver‘s FiveThirtyEight blog.

The biggest insult of this whole thing is that if 30% of users don’t vote, then there won’t be another opportunity for users to do so, making this a real “use it or lose it” situation. So go to Facebook’s governance page and vote. It takes ten seconds. It takes much longer if you actually read all the documents, but we both know you’re not going to do that.