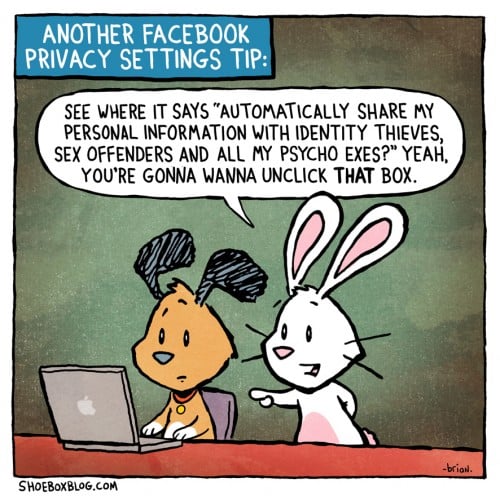 I’m not sure anyone I know is truly happy with their privacy settings on Facebook. Either they don’t understand them or, if they do, they find them unsatisfactory. Yet we all keep using the free social networking website. But oddly enough, the site’s privacy settings recently caused some strife in founder Mark Zuckerberg’s family. One of his sister’s photos was posted publicly online even though she thought it was set to private.

We recently discussed Facebook’s new privacy settings, including a feature that would allow anyone to message you for a dollar. It seems with each new update, users get more confused and/or angry, which is the case with Zuckerberg’s sister Randi.

Randi Zuckerberg posted a photo of her family playing with the new Poke app to Facebook. She thought she did this privately, but as so many have already found out, what we think is private and what Facebook thinks is private can be two very different things. The picture wound up in the feed of Vox Medi’s Callie Schweitzer who assumed she was seeing the picture because she subscribes to Zuckerberg’s Facebook feed, meaning the photo was public. Schweitzer then tweeted the picture.

Schweitzer was wrong. She didn’t see the photo because she was subscribed to Zuckerberg’s feed, she saw it because she’s friends with another one of  Zuckerberg’s sisters who was tagged in the photo. Randi Zuckerberg took to Twitter to complain and got into a conversation with Schweitzer who eventually took down the photo in question. After all was said and done, Zuckerberg tweeted:

Actually, I’d say this is exactly about privacy settings but to be fair, Zuckerberg seemed genuinely upset someone would post her picture online without her permission. However, as the chairman’s sister, we didn’t expect her to badmouth the company.

(via Geekosystem, image via ShoeBoxBlog.com)