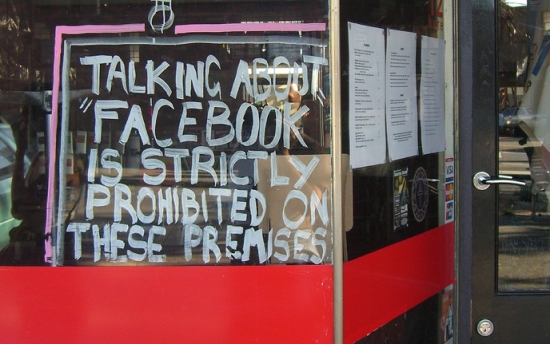 Privacy on Facebook is essentially a myth at this point. They keep adding and changing settings to make users feel like they have control over who can see what they’re posing, but in reality anything you put on Facebook, regardless of settings, has the potential to wind up in the public eye. It can even happen if you’re related to the creator of Facebook . Randi Zuckerberg, Mark Zuckerberg’s sister, had a photo she posted privately go public on the Internet. If a member of the Zuckerberg family can’t even get some privacy on Facebook, what hope is there for the rest of us?

Randi Zuckerberg posted a photo of her family playing with the new Poke app to Facebook. She thought she did this privately, but as so many have already found out, what we think is private and what Facebook thinks is private can be two very different things. The picture wound up in the feed of Vox Media‘s Callie Schweitzer who assumed she was seeing the picture because she subscribes to Zuckerberg’s Facebook feed, meaning the photo was public. Schweitzer then tweeted the picture.

Zuckerberg wasn’t happy about the added attention for her photo. She called Schweitzer out on Twitter and said reposting the photo was “way uncool.” The two had a bit of a back-and-forth about it, and Schweitzer apologized and removed the picture. It seems that Schweitzer saw the picture not because she subscribes to Zuckerberg, but because she is Facebook friends with one of the other Zuckerberg sisters who was tagged in the private photo.

The reaction by Zuckerberg to her photo going public, even one so innocuous as her family playing with their phones, is understandable, but taking it out on Schweitzer seems misplaced. Yes, Schweitzer reposted it to Twitter, but Zuckerberg has no one to blame but herself, and maybe her brother, for her privacy settings allowing Schweitzer to see the picture in the first place.

Even after the two made up on Twitter, Zuckerberg doesn’t blame herself or Facebook, but chalks it up to bad etiquette:

That assumes we’re friends with everyone we’re connected to on Facebook. I’m not friends with all of my “friends” on Facebook. Some of them I downright loath. If anyone’s etiquette is in question here, it’s Zuckerberg’s. The first rule of Facebook is you don’t post anything you don’t want going public on Facebook, even if it’s your brother’s company.

(via Forbes, image via avlxyz)