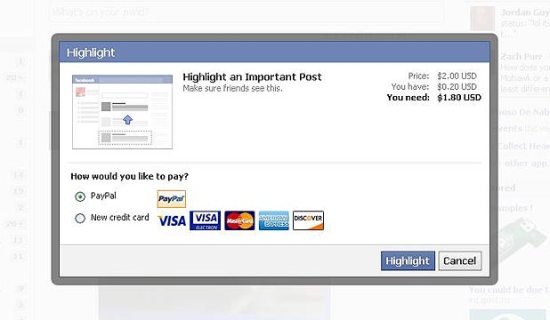 Ever have something to say that just needs to be heard by everyone? It used to be enough that Facebook let you announce things to hundreds of your “friends” at the same time, but now that rush is wearing off, and everyone is saying so much that it’s easy to get buried. Would you be willing to pay $1 to make sure your obnoxiously cutesy note to your schmuggum wuggums is at the top of everyone’s feed? $2 to make sure Suzy knows you’ve got a new girl now and definitely aren’t thinking about her at all, not even the tiniest bit? If Facebook’s “Highlight” feature comes to pass the way Stuff.co.nz is reporting, you might be able to do just that.

According to reports, the new feature was happened upon by a user in New Zealand. While he naturally assumed this was some kind of a scam, Facebook spokeswoman Mia Garlick has confirmed that this is actually a new feature in testing. “We’re constantly testing new features across the site. This particular test is simply to gauge people’s interest in this method of sharing with their friends,” she told Stuff.co.nz.

While the feature may strike you as a little gross, it totally makes sense. As Facebook keeps trucking on toward their IPO, monetization is going to become a bigger priority. Facebook ads have never been a particularly lucrative market, and a feature that capitalizes on Facebook users’ desperate need to scream directly in the faces of their peers — which is what they come to Facebook to do — could make a lot of money.

Reportedly, Facebook is still toying with the details of the feature, including how much it will cost and if it will even be implemented. That being the case, it’s possible that “Highlight” could pop up as a free feature somehow, or never rear its ugly head again. Whatever the case, you should probably expect more of the same from Facebook;  they’re probably going to continue to find ways to part you from your money. Let’s just hope none of those ways completely destroy the service. Or hope for exactly that. Your choice.

(via Stuff.co.nz via Business Insider)