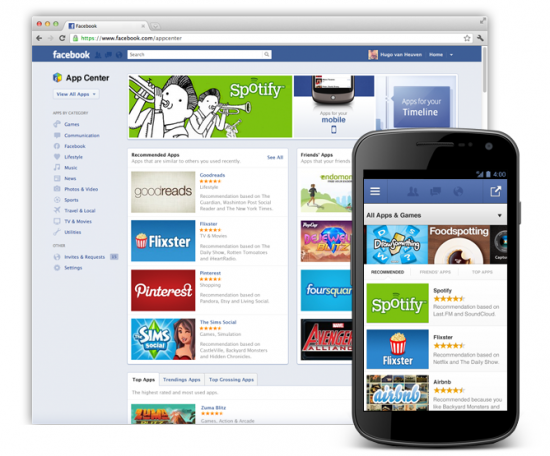 Doubtlessly as a calculated move, Facebook, still barreling towards an IPO, has announced plans to introduce an app store and paid apps to the social network. It was just a matter of time, really. The store, called the App Center, is to be a central index of Facebook apps rated by things like user reviews an engagement. Apps that don’t meet quality guidelines won’t even be listed. With the App Center, Facebook users will finally have a central location at which to browse the apps that everyone is using and the apps that, in theory, don’t suck. Oh, and people are going to try and start selling you things there, naturally.

Much like iTunes, every app on the App Center will have its own little page containing a description of the app’s functionality and other pretty standard copy. The App Center also promises to make life easier for mobile users by indexing information about which apps will work on which mobile Facebook and on which devices. Through the App Center on a mobile device, users can arrange for the download of a third-party Facebook compatible app through Google Play or the iTunes Store.

When it comes to the paid apps, Facebook isn’t saying too much besides stating that they will exist. Citing success regarding in-app purchases, Facebook’s announcement states a desire to give developers more options when it comes to making money from their apps. That’s pretty much where the information begins for us, the unwashed masses. Developers, on the other hand, can sign up for the beta and presumably get the skinny on things at some point in the near future.

A Facebook app store might not be the most necessary thing in the world, but it seems like it should have its uses and it’s certainly not a surprise. The whole thing seems like one more step towards a world where Facebook exists as its own little self-contained Internet. Of course, I guess it already does. In any event, expect more to come. I bet this is only the beginning of a push to bring more content fully into the loving arms of Facebook, where it can thrive, snuggled against the network’s breast and need never glance outwards.

Facebook is basically trying to absorb the entire world