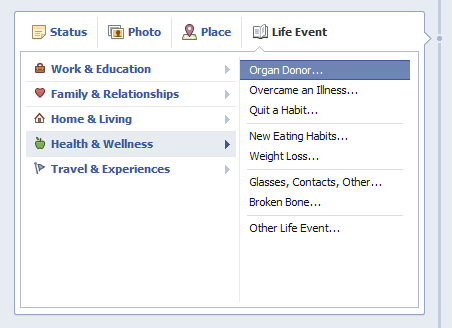 Facebook is notorious for being a time-waster, but could it be a life-saver? An announcement this morning suggests that it’s going to try. Making good use of its built-in audience of millions, Facebook has incoporated a new flavor of “Life Event” for users to put on their timelines: Becoming an organ donor. By making it easy for Facebook users to both advertise the fact that they are donors — or become donors if they aren’t already — Facebook has already increased the total number of organ donors, and could effectively put an end to organ shortages.

The change is simple, but wide reaching. All that’s really new, from a Facebook perspective, is the option of “Organ donor” underneath the Health & Wellness category in Life Events. It’s hardly anything that couldn’t be done in a status. The dialogue also provides an interactive map that can help people register to become donors in their home state. The whole thing has resulted in increased awareness of organ donation in general, which everyone can agree is a good thing.

While Facebook is certainly responsible for this refreshed discussion of being an organ donor, it’s interesting precisely how little they had to do to pull it off. The lion’s share of the operation is bringing up the term “organ donor” and pointing people in the right direction. That said, just because it’s easy doesn’t mean it’s not worth doing. As to why Facebook decided to do this, or why they decided to do this right now, The Atlantic points out that Facebook’s IPO documents are reaching the approval point, and this kind of positive publicity will certainly be good for stock prices.

If you aren’t already an organ donor, now is as good a time as any to become one. In this new digital world, it’s a lot easier than it used to be, but you probably didn’t know that until Facebook shined a light on the issue. Also, when it comes to things you can do on Facebook, this is one of the few that’s actually worth the time it takes. Likes still don’t save lives, but they just came a little closer.